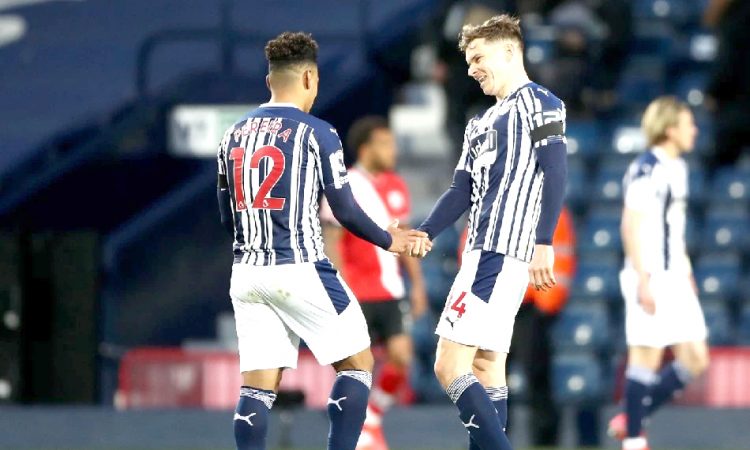 LONDON, April 13: West Bromwich Albion improved their slender hopes of avoiding relegation from the Premier League as they survived VAR controversy to beat Southampton 3-0 on Monday.

Sam Allardyce’s side saw Mbaye Diagne’s goal questionably ruled out by VAR early in the first half at the Hawthorns.
But they recovered from that blow to sweep into a two-goal lead by half-time thanks to Matheus Pereira’s penalty and a Matt Phillips strike.
Callum Robinson sealed West Brom’s second successive win after the interval as the Baggies built on their stunning 5-2 victory at Chelsea.
Second bottom Albion move within eight points of fourth bottom Newcastle with seven games left.
The Baggies have scored eight goals in their last two games, two more than they had netted in their previous 11 combined, but their unexpected revival might have come too late to save them from slipping into the Championship.
Southampton’s limp display was the worst possible preparation for next weekend’s FA Cup semi-final against Leicester.
After just four minutes it looked like being a frustrating evening for Albion.
Diagne nodded in from close-range and was flagged offside, with VAR backing the onfield call because television cameras could not get the right angle to conclusively prove the striker was on or offside.
Southampton midfielder Stuart Armstrong tested Albion keeper Sam Johnstone with a curling blast.
But Pereira was brought down by Saints keeper Fraser Forster in the 32nd minute and the Brazilian picked himself up to dispatch the spot-kick.
Phillips got the second three minutes later when he converted Diagne’s cross at the far post.
Robinson put the result beyond doubt in the 69th minute when he drilled in from Okay Yokuslu’s pass.
Adding to Southampton’s woes Johnstone saved James Ward-Prowse’s stoppage-time penalty after Conor Townsend’s foul on Moussa Djenepo.
Later on Monday, Brighton host Everton as the visitors push for European qualification.
EPL: Brighton and Everton battle out dull 0-0 draw

Brighton & Hove Albion and Everton fought out a 0-0 draw in a dour Premier League clash on Monday after neither side managed to create any clear-cut chances with defences dominating at the Amex stadium.
The result left Everton eighth on 48 points from 30 games while Brighton moved one place up to 15th on 33 points from 31 games, seven ahead of the relegation zone with 18th-placed Fulham on 26 points from 32 matches.
Brighton manager Graham Potter was pleased with his team’s display although he conceded the final pass let the dominant Seagulls down.
“In terms of the performance I’m really happy,” he told the BBC. “We were the team closest to winning. We had some good moments, they blocked well and defended well when they had to.
“We missed the last pass of that bit of quality in the final third. But we are happy with what we have done. It’s an important point and we have to move forward as there’s still work to be done.”
Everton captain Seamus Coleman acknowledged his side would be left kicking themselves for dropping points against the league’s struggling teams if they failed to qualify for European competition next season.
“Yeah it would be a massive disappointment,” he told Sky Sports. “We have been given opportunities this season by other results. We just had to look after ourselves and we would have been in a better position.
“No disrespect to these teams but against your Fulhams at home and your Newcastles, that’s where your disappointment comes. It’s hard to put your finger on it.”
Brighton had the upper hand in the first half and twice came close as Neal Maupay had a low shot deflected by Yerry Mina while Yves Bissouma fired over the bar with an acrobatic overhead kick from a tight angle.
Jakub Moder blazed a first-time shot off target after a corner midway through the second half as Brighton continued to press before Maupay volleyed wide from inside the penalty area.

Everton were forced to defend desperately as their keeper Robin Olsen tipped over a Lewis Dunk header in the 78th minute and the visitors also needed several frantic clearances in the closing stages to scrape a draw.
Everton, who were looking to set a club record of 10 away Premier League wins in a season, nearly snatched victory out of the blue in stoppage time as substitute Alex Iwobi shot inches over the crossbar. (AFP/Reuters)