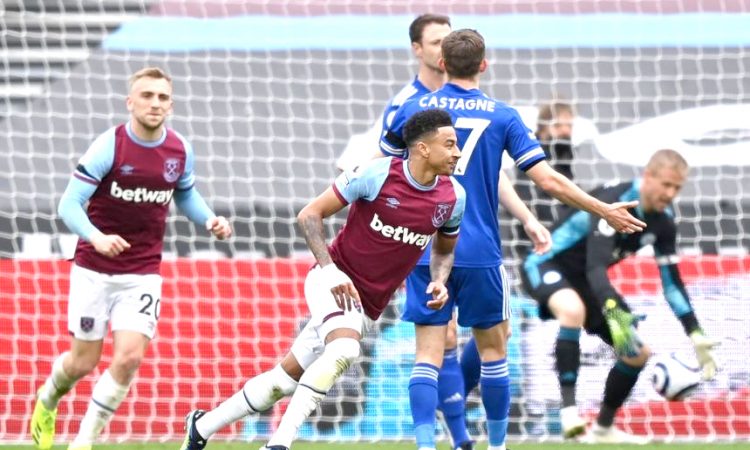 LONDON, April 11: Jesse Lingard scored twice as West Ham United climbed back into fourth spot in the Premier League with a vital 3-2 victory over third-placed Leicester City on Sunday.

Lingard, who has been in scintillating form since arriving on loan from Manchester United in mid-season, took his tally for the Hammers to eight goals with two strikes before halftime.
Jarrod Bowen made it 3-0 shortly after the interval and West Ham were denied a fourth when Issa Diop’s effort was deemed offside.
Leicester finally came to life with Kelechi Iheanacho punishing a defensive mistake with 20 minutes remaining.
West Ham, who squandered a 3-0 lead to draw with Arsenal last month and almost did the same against Wolves in midweek, looked nervy at times after that and Iheanacho ramped up the tension with a second goal in stoppage time.
But West Ham survived some heart-in-the-mouth moments in six added minutes to secure a vital victory in their quest for an unlikely top-four finish.
They moved back above Liverpool and Chelsea with 55 points from 31 games, one point behind Leicester who suffered a second successive league defeat.
Premier League: Allan Saint-Maximin inspires crucial win for Newcastle at Burnley

Frenchman Allan Saint-Maximin came off the bench and turned the game around for lowly Newcastle United as they came from behind to seal a vital 2-1 Premier League win at Burnley on Sunday.
Burnley had led through an 18th-minute goal from Czech striker Matej Vydra and were well on top before Saint-Maximin, returning from injury, came off the bench and changed the game inside seven minutes.
The Frenchman set up Jacob Murphy for a superbly struck equaliser from outside the box before he produced a brilliant individual goal, running at the Burnley defence from deep and firing a lethal drive into the bottom corner.

Seventeenth-placed Newcastle moved to 32 points, six clear of Fulham, who occupy the highest spot in the relegation zone, with a game in hand.
Burnley are one point above Newcastle in 15th place. (Reuters)