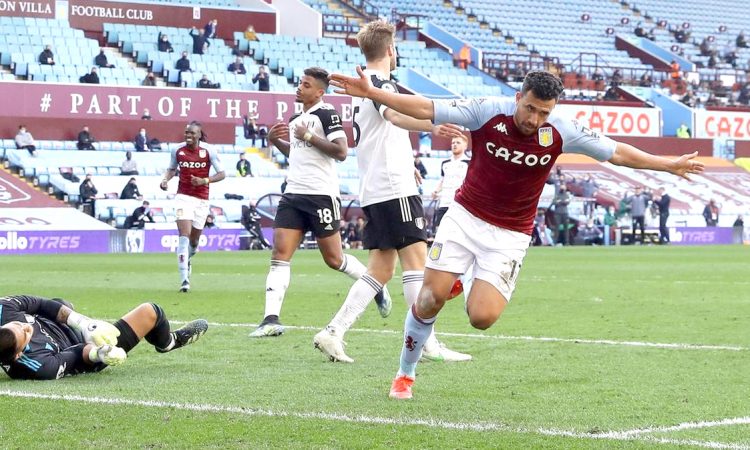 BIRMINGHAM, April 5: Fulham’s Premier League survival hopes suffered a massive blow as they conceded three times in the space of nine second-half minutes to crash to a 3-1 defeat at Aston Villa on Sunday.

Scott Parker’s Fulham side looked poised to clamber out of the bottom three when Aleksandar Mitrovic gave them the lead just past the hour mark after a Tyrone Mings mistake.
But everything went wrong for the Londoners as substitute Trezeguet’s double turned the game on its head.
The Egyptian equalised in the 78th minute with a crisp finish and volleyed his side in front three minutes later after some sloppy Fulham defending.
Newly-capped England striker Ollie Watkins settled the issue in the 87th minute with a close-range finish.
A victory for Fulham would have seen them move above Newcastle United into 17th place on goal difference but they remain three points behind having also played a game more.
Villa are up to ninth with 44 points and will still believe they can qualify for a European place.
EPL: Newcastle deny Tottenham return to top four in 2-2 draw

Tottenham Hotspur missed the chance to move up to provisional fourth place in the Premier League after relegation-threatened Newcastle United held them to a 2-2 draw with a late equaliser from substitute Joe Willock at St James’ Park on Sunday.
The result leaves Spurs in fifth with 49 points, two points behind fourth-placed Chelsea, but West Ham United can go above both of their London rivals into the Champions League spots if they beat Wolverhampton Wanderers away on Monday.
It also marked the sixth time Spurs have failed to win a league game this season when they were leading at halftime.
The result left Newcastle three points above third-bottom Fulham, who were playing at Aston Villa later on Sunday.
Harry Kane gave Tottenham the lead with two goals in four minutes in the first half after Joelinton’s opener for Newcastle before Arsenal loanee Willock struck to earn a point.
“Whenever you’re ahead in a game, as we have been a lot this season, and you give the lead away in the last five to 10 minutes, it’s always hard to take,” Kane told BBC Sport.
Newcastle took the lead after 28 minutes when sustained pressure saw them win the ball back and Sean Longstaff found Joelinton at the far post for the Brazilian to fire home.
However, the advantage lasted barely 90 seconds as Spurs hit back when Kane capitalised on a ricochet from Giovani Lo Celso’s pass and tapped into an empty net two minutes later.
England striker Kane doubled the visitors’ lead in the 34th when he peeled off his marker to receive Tanguy Ndombele’s through ball before pulling the trigger with a low, angled shot past goalkeeper Martin Dubravka into the far corner of the net.
Spurs were quieter in the second half as Newcastle grew into the game but Kane had a golden opportunity to score a hat-trick on a counter-attack but his effort hit the woodwork.
“I feel like we could have played better in the second half. We were a bit sloppy. We didn’t take our chances and got punished for it,” Kane added.
Newcastle’s perseverance finally paid off in the 85th minute when Willock pounced on a rebound at the back post to equalise after Tottenham failed to clear Joelinton’s header.
“I’m an Arsenal player so it does makes it a bit sweeter,” Willock, who came on in the 79th minute, said. “(Manager Steve Bruce) told me to come on, run around and get in the box to try and score goals. I’m happy I was able to do that.” (Reuters)