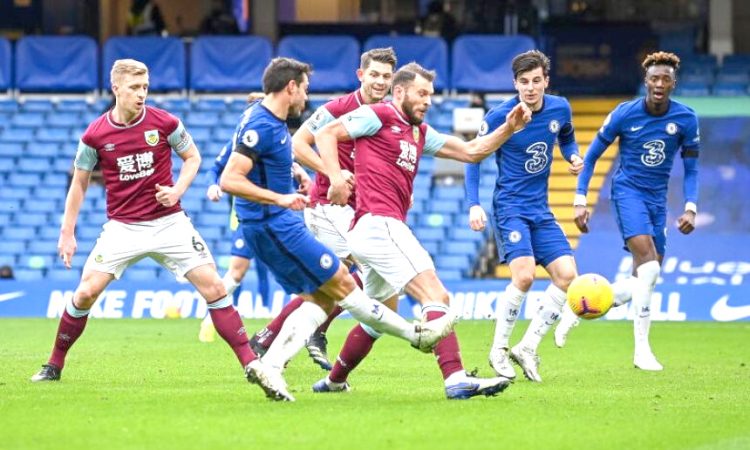 LONDON, January 31: Chelsea notched up their first win under Thomas Tuchel on Sunday with a 2-0 victory over Burnley thanks to goals by Spanish defenders Cesar Azpilicueta and Marcos Alonso who have both been given a chance to shine under the German coach.

Azpilicueta, restored to Chelsea’s starting line up by Tuchel in his two games since replacing Frank Lampard, scored with an angled shot in the 40th minute after sprinting 80 yards to be fed by winger Callum Hudson-Odoi.
Alonso, playing in the league for the first time since September, secured the win in the 84th minute when he controlled a pass from Christian Pulisic with his chest and knee before swivelling to hit a shot past Burnley goalkeeper Nick Pope.
Hudson-Odoi, another who has featured prominently under Chelsea’s new German manager, and fellow Chelsea academy product Mason Mount were at the heart the Blues’ best moves as they tried to turn their dominance of possession into more goals.
The youngsters’ form contrasts with the struggles of the club’s two expensive German signings Timo Werner and Kai Havertz who pose Tuchel’s most immediate challenge. Werner wasted a good early chance for Chelsea while Havertz was dropped to the bench and only came on for the last 10 minutes.
The win pushed Chelsea – who drew 0-0 last week against Wolves in Tuchel’s first game – up to seventh in the Premier League standings, 11 points behind leaders Manchester City. Burnley slipped to 16th place.
Manchester United held in stalemate at Arsenal

Manchester United were held to a 0-0 draw at Arsenal in the Premier League on Saturday as they fell three points behind leaders Manchester City.
City earlier beat bottom club Sheffield United 1-0 to move to 44 points from 20 matches while United are on 41 points from one game more.
Third-placed Leicester City, who are on 39 points, will go above Manchester United if they can beat Leeds United on Sunday.
After a disappointing first half, Arsenal came out strongly following the interval and Willian had a good chance in the 49th minute which was well blocked by Aaron Wan-Bissaka.
Alexandre Lacazette came closest to scoring for the Gunners with a 56th minute curling free kick that struck the bar.
Emile Smith Rowe forced a good save out of United keeper David De Gea with a low drive.
United, beaten at home by Sheffield United on Wednesday, created little until the final minute of normal time when Edinson Cavani volleyed wide from close range from Wan-Bissaka’s cross.
United set a new club record of 18 away games unbeaten in the league while Arsenal, eighth on 31 points, have not lost since Christmas. (Reuters)