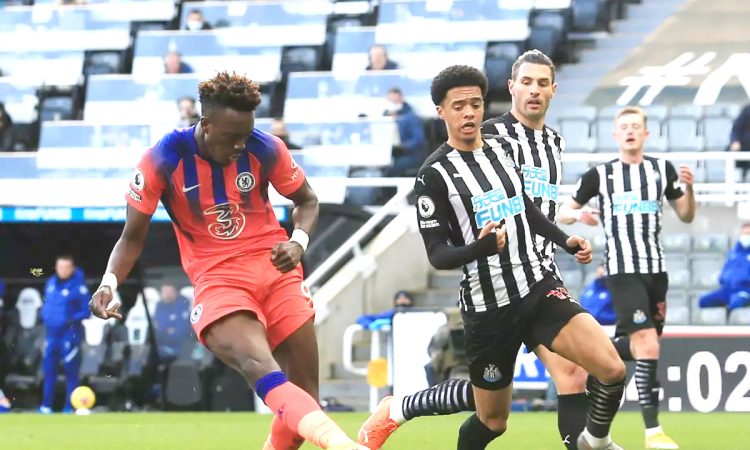 NEWCASTLE, November 21: Chelsea became the seventh club to top the Premier League standings this season after a 2-0 victory at Newcastle United on Saturday courtesy of an own goal by Federico Fernandez and Tammy Abraham’s second-half effort.
Frank Lampard’s side dominated before the break and took the lead in the 10th minute when Fernandez, under pressure from Ben Chilwell, turned in Mason Mount’s cross.
Chelsea really should have been out of sight with Timo Werner guilty of missing some gilt-edged chances but Newcastle came alive after the break.
Isaac Hayden squandered a great chance to equalise on the hour but a few minutes later Werner burst through on goal before passing to Abraham to double Chelsea’s lead.
Sean Longstaff came close for Newcastle when his rising drive clipped the crossbar but Chelsea could have scored more with Werner having a goal ruled out for offside.
Chelsea’s third successive league win lifted them level on 18 points with Leicester City but are top thanks to a better goal difference. Leicester face Liverpool on Sunday.
Aston Villa and Tottenham Hotspur could both replace Chelsea at the top later on Saturday.
After a huge investment in the squad, Chelsea are beginning to show the consistency for a title challenge after something of a mixed start to the new campaign.
Saturday’s win was more comfortable than the scoreline suggests with Newcastle having only one shot on target.
Chelsea’s problems in the goalkeeping department also look to be solved with Edouard Mendy keeping a seventh clean sheet in his nine appearances for Chelsea in all competitions.
“We put the game away with a professional performance,” Lampard said. “The result is key because the Premier League is tough and relentless.
“It’s pleasing, but I’m not going to get excited about being at the top of the table for five minutes. It’s a long season.”
Argentine Fernandez was a little unfortunate to give Chelsea the lead but the hosts were indebted to goalkeeper Karl Darlow as he made saves from Werner and Abraham.
Newcastle were more positive after the break with the dangerous Allan Saint-Maximin finally getting some service and Hayden should have done better than scoop a shot over the bar when through on goal with only Mendy to beat.
But Chelsea, with defender Antonio Rudiger starting his first league game of the season, rode the mini-storm before regaining control to win with ease.
Newcastle’s third home defeat of the season left them on 11 points from nine games. (Reuters)