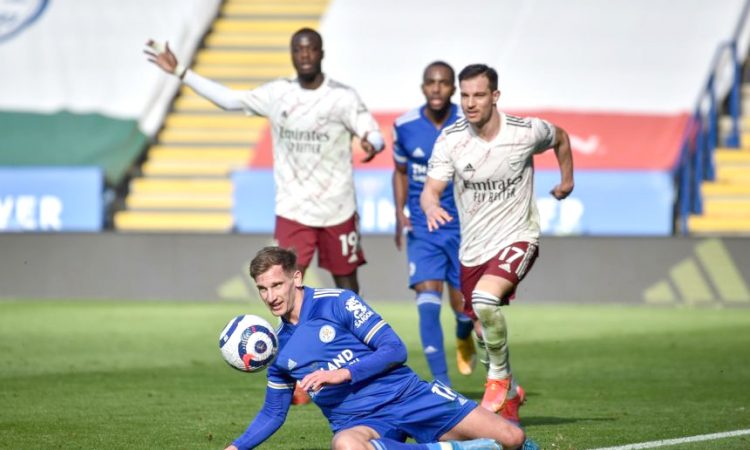 LEICESTER, February 28: Arsenal revived their hopes of playing in European competition next season after goals from David Luiz, Alexandre Lacazette and Nicolas Pepe helped them to a 3-1 win at Leicester City in an entertaining Premier League clash on Sunday.

The result lifted Arsenal two places up to ninth on 37 points from 26 games while Leicester stayed third on 49 points after suffering a second setback in three days following their Europa League elimination.
The Foxes produced another poor performance after Thursday’s 2-0 home defeat by Slavia Prague sent them crashing out of Europe’s second-tier competition, where Arsenal progressed into the last 16 with a 4-3 aggregate win over Benfica.
Lacazette said two successive wins would boost Arsenal’s confidence in their bid to climb higher up the standings.
“We want to go as high as possible in the league and the reaction today after the goal we conceded was really good,” the French striker told BT Sport.
“We know it’s really important now, we have March April and May to finish well. Comeback wins in two successive games will be a massive confidence boost.”
Leicester took a sixth-minute lead at King Power stadium as Youri Tielemans robbed two Arsenal players of the ball on the right flank and cut inside the area before he fired a low shot into the far corner.
The Gunners equalised in the 39th when Luiz headed a Willian cross into the bottom right corner and Lacazette turned the tide in first-half stoppage time as he drilled in a penalty after a VAR check showed Wilfred Ndidi had handled the ball in the area.
Poor defending cost Leicester again in the 52nd minute as they allowed the visitors to break through the middle before Willian slipped the ball to Pepe and the Ivorian forward tucked it into an empty net from two metres.
Arsenal held on comfortably in the closing stages and missed chances to win by a bigger margin as Kieran Tierney volleyed just wide from 20 metres and Pierre-Emerick Aubameyang came close with a fizzing low shot.
Kelechi Iheanacho summed up Leicester’s afternoon in the last minute of stoppage time when he blazed the ball over the bar with the goal at his mercy.
EPL: Bale double helps Tottenham crush Burnley

Gareth Bale produced his most impressive performance since returning on loan to Tottenham Hotspur with two goals in his side’s 4-0 win over Burnley in the Premier League on Sunday.
The Welshman continued his recent resurgence by marking only his third league start of the season with the opening goal after only two minutes, prodding in from close range.
He then set up Harry Kane for Tottenham’s second after 15 minutes before Lucas Moura made it 3-0 before halftime.
Bale then claimed his second of the game with a clinical finish after 55 minutes as Tottenham returned to form in the league having lost five of their previous six games.
The impressive win left Tottenham in eighth spot with 39 points from 25 games and revived their hopes of finishing in the top four. Burnley are 15th with 28 points.
Bale’s lack of Premier League game time has been something of an anti-climax after the club’s former talisman returned in October on loan from Real Madrid having left in 2013.
But the four-time Champions League winner is finally beginning to show the kind of form that persuaded the Spanish giants to sign him for 100 million euros ($120.74 million).
He has now scored four times in his last four appearances in all competitions and although he did not register in the loss by West Ham United last week he was eye-catching as a second-half substitute.
Looking fit and sharp, Bale linked up superbly with Kane and Son Heung-min as manager Jose Mourinho unleashed the trio together, albeit against a Burnley side who were there for the taking.
“It’s not just about scoring. It’s about our all-round play and helping the team. I’m delighted with the goals and the assist and whatever I can do for the team,” Bale said.

“I’ve been happy all season. In the dressing room I feel comfortable and I’m having fun. I’m happy and I’m sure it’s showing on the pitch.”
A flowing Tottenham move after two minutes ended with Bale ghosting on to Son’s astute pass to touch past Nick Pope.
Bale then spotted the run of Kane with a sublime diagonal ball and the England captain’s shot deflected past Pope for his 14th Premier League goal of the season.
It was all too easy for Tottenham and Moura made it 3-0 when Sergio Reguilon’s ball into the box was only half cleared and the Brazilian fired past Pope.
Tottenham’s tempo dropped a little after the break but Bale capped a fine display with a cultured left-foot finish into the bottom corner from Son’s feed.
It was Tottenham’s biggest home league win since they thrashed Burnley 5-0 last season. (Reuters)