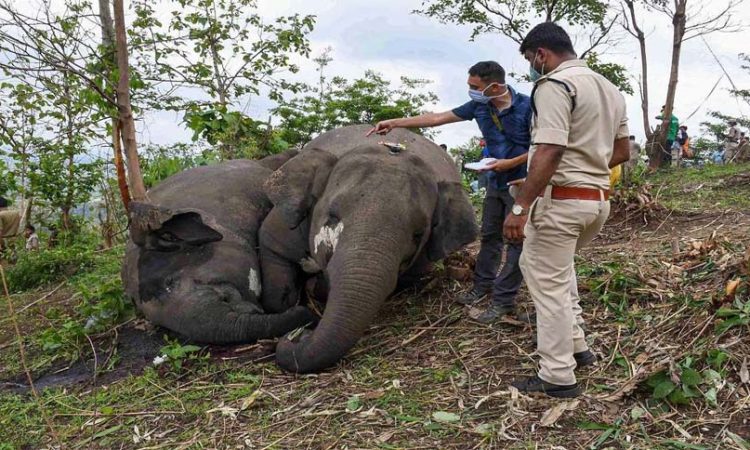 As an organization, committed to the cause of biodiversity conservation, “we appeal to the chief minister to intervene in the matter and constitute a new committee to scientifically investigate and find out the truth behind the death of 18 wild Asian Elephants”, Nature’s Beckon, Director, Soumyadeep Datta said on Tuesday.
Datta called for a committee, headed by a retired Judge, and comprising a geologist, electrical engineer, lightning expert, Zoological Survey of India’s representative, Wildlife Institute of India’s representative, Police officer and representative of civil society groups to investigate the deaths of the elephants on May 12 at Bamunipahar.
He also demanded that anyone found guilty of destroying or hiding any kind of evidence with regard to this incident must be convicted at the earliest.
Datta alleged that the investigating committee had no lightning experts, electrical engineers, geo-physicists, forensic experts, crime branch personnel, etc, and consisted of only veterinarians all of whom are directly or indirectly related to the forest department.
All the so called tests were done in their own laboratories, and none from independent labs while no attempts to mark the burial spots of each individual carcass was made but they used salt to accelerate the decomposition process so that no further investigations can take place, he alleged.
He further claimed that the report does not mention the exact physical, pathological status of all the carcasses nor are there any photographs to justify their claim that they inspected all the carcasses thoroughly.
The entire report is based on assumptions with no scientific analysis and “nowhere does it say that lightning killed the elephants, rather they assumed that lightning was the main culprit”, he said
Their histopathological report is only a tentative diagnosis stating the possibility of death by high voltage electrocution but “can this occur only through lightning and what investigations were carried out to suggest they were not electrocuted by other means”, Datta asked.
Meanwhile, Forest minister Parimal Suklabaidya told PTI that the death of 18 elephants was a very tragic incident and “has hurt the people of the state immensely but a certain section is trying to make an issue even when concerned specialists and experts have come to a conclusion after a thorough investigation and analysis of evidences and studies based on their expertise and knowledge”.
He said all angles, including foul play by poisoning or any other means, were examined thoroughly with samples from nearby ponds taken and tested and there were no bullet or any injury marks caused by any other weapon was found.
The minister on June three had said in a press conference that reports from different agencies and both international and national experts along with the findings of the investigation officer indicate that the recent sudden and tragic death of 18 elephants in a proposed reserve forest Assam was caused by “accidental electrocution due to lightning”.
“It is logically opined that the sudden and tragic deaths of the elephants at Kundoli Proposed Reserve Forest may not be attributed to retaliatory killing by poisoning or electrocution or any deadly disease but is due to the accidental electrocution by lightning that occurred on the fateful day of May 12 with a strong negative lightning flash of a peak current of 39,000 amperes”, he said.

Comments were also received from experts like Rhino Recovery Fund Director Dr Markus Hofmeyr and Chair of Asian Elephant Specialist Group Vivek Menon and they too suggested that the cause of death may be suspected to be a “lightning strike as such incidents are not uncommon”, the minister said.
The Forest Range Officer of Kathiatoli Range of Nagaon Forest division received information from the Assistant Manager of Topajuri Tea Estate about four elephant carcasses spotted.
A team of forest officials along with local villagers began a search of the Konduli Reserve forest and during the search, four carcasses were found on the Bamuni foothill while around one kilometre away on the uphill side, carcasses of 14 elephants were found on May 13. (PTI)