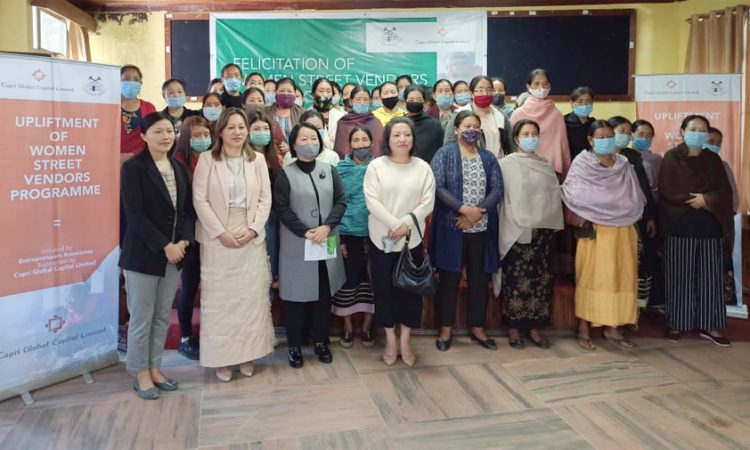 Our Correspondent
KOHIMA, OCTOBER 29: An intervention into the lives of women street vendors by the Entrepreneurs Associates (EA) to correct their way of conducting business has borne fruit. A modest event at the Red Cross Complex, Kohima, today marked the success of the ongoing “Uplifting Women Street Vendors” project.
54 Street Vendors from Kohima were felicitated by Entrepreneurs Associates as part of the project. The women street vendors were gifted with a cheque of Rs.2000 each as bonus for successfully managing to save Rs.10,000 from their profits from sale of vegetables.
Among the 54 street vendors, 5 excelled by saving more than Rs. 1 lakh.
The project was launched on October 13, 2017, as an intervention after the EA observed that most street vendors lacked technical and the financial know-how about operating their businesses, particularly in a market where traders from outside the state posed stiff competition.
The EA adopted a holistic approach in addressing the issue taking into consideration financial and legal aspects, as well as health and hygiene, business ethics, customer service and savings. The EA was assisted in the intervention by its partner organisations like Sisterhood Network, Nagaland State Legal Services Authority (NSLSA), T Keditsu Foundation, Caring Friends and concerned citizens.
Speaking about the project, Advisor, EA, Neikule Doulo said a trend was noticed in the market where despite conducting business for many years there were no noticeable improvements in the lives of the vendors. Some have been at it for more than a decade or 15 years, he informed. EA started the programme for women street vendors to save a margin of their profit generated from selling vegetables into an account. The project took off with only 16 street vendors initially, Doule said.
At present, EA has engaged 2008 street vendors, and effectively functioning in 7 districts of Nagaland. “Over the years we have noticed that some have improved their life for the better by gaining financial stability and even buying plots of land. We are really encouraged to see this development”, Doulo enthused.
Lauding the activities of women street vendors, Secretary (Judicial) Justice & Law Department, Nino Iralu in her address said “You are rendering a friendly service to the society; you are not just doing this for yourself and your family but you are doing the community a great service.”
CEO, EA, Neichute Doulo also expounded on the importance of saving at the felicitation programme. “If you make saving a habit, it will help you in the long run”, he stated. The CEO also noted that many Naga business men and women are doing businesses without capital accumulation. He also debunked the fear many people have about loans, and encouraged the street vendors to avail loans. However, he cautioned that there are good loans and bad loans and that one must have knowledge of loans in order to do business.