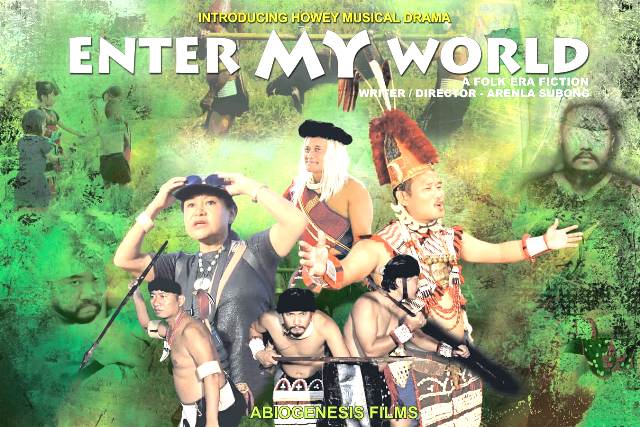 After ‘Big Time Buddies’ (2003) and ‘Lichaba’s Daughter’ (2009), Abiogenesis Films has released its third feature film titled ‘Enter My World’ through Filmhub, an Indie Digital Film distributor based in USA. Currently it’s available for rental and purchase at Amazon Prime Video. It will soon be available at various digital video outlets across the world.
‘Enter My World’ is a folk era fiction which is a new form of musical with an exciting story. Referred to as Howey Musical, the songs are sung in Howey tunes and the script is in English. Howey Musical Film has been evolved by Arenla Subong, who has directed, acted and written the film.
‘Enter My World’ tells the story of a writer and her assistant who on their research venture are caught by some hunters in a jungle and held captives in a Naga village suspecting them to be spies. There, they are surprised to find themselves in a world which is in the folk era. The end is electrifying with a tiger spirited man and a boar spirited man confronting each other and the writer and her assistant trying to flee.
Temjen Imna Along, Minister of Higher & Technical Education & Tribal Affairs had earlier unveiled the official poster of it during Tibal Vaganza Festival in September 2019 at Old Showuba, Dimapur.
The film, being an experimental and non-commercial film, has been submitted to very few film festivals but due to the pandemic, most of the festivals have been cancelled.
Echo BRICS Film Festival (Echo BRICS FF), Moscow had selected ‘Enter My World’ and they have updated the Judging Status to Semi-Finalist. The festival was scheduled to take place between April 9 and 12, 2020 but due to the pandemic, they are going only online to present selected films to viewers and jury members.