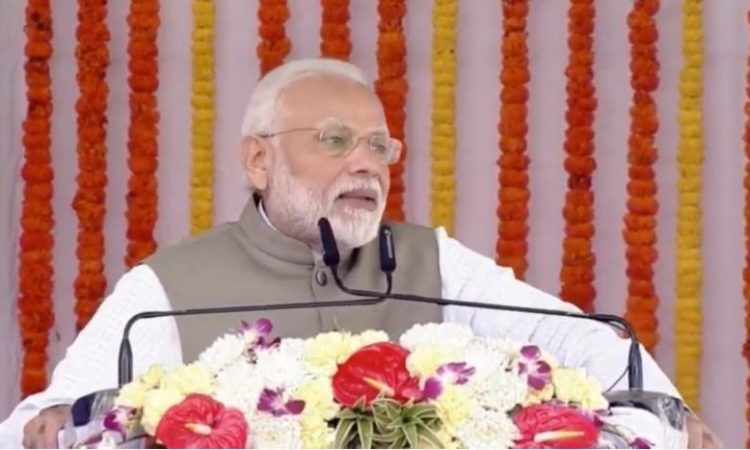 Allahabad, February 29: Prime Minister Narendra Modi on Saturday said ensuring that all citizens get benefit and justice is the government’s responsibility and also the base of ‘sabka saath, sabka vikas and sabka vishwas’.
“It is the responsibility of the government that every person is benefitted and every person gets justice. This is the base of sabka saath, sabka vikas, sabka vishwas,” he said reciting a Sanskrit shloka at a mega camp for distribution of assistive devices among people with disabilities and senior citizens.
Modi said serving 130 crore people of the country is the priority of his government.
Hitting out at previous governments, he said they did not care for the people with disabilities but his dispensation was thinking about their problems and finding ways to reduce their issues.
During previous governments, very few such camps used to be organised, he said.
“In the last five years, our government held around 9,000 camps in various parts of the country. In the five years of the previous government, equipment to people with disabilities worth less than Rs 380 crore were distributed, while our government gave equipment worth more than Rs 900 crore, which is two-and-half times more,” he said.
“I am of the view that these equipment will only assist your ‘buland hausla’ (strong confidence). Your real strength is your patience, capacity (saamarthya) and mind (maanas),” he said, adding that he has been told that many records are being created at this camp.
(Cont’d on Page 12)
Ensuring justice reach all priority of govt: PM Modi
(Cont’d from Page 1)
In building a “new India”, the partnership of every youth and child with disability is essential.
“Be it industry, service sector or sports, the skills of the divyaangjan are being continuously encouraged,” he said.
“The sensitivity with which the government has worked for the divyaangjan was never done earlier. The divyaangjan were earlier made to make rounds of offices for weeks, only then they used to get some help. Attention was not paid to the seriousness with which your problems should had been heard. The situation wherein the divyaanganj were left ‘besahara’ (helpless) is not acceptable to us,” Modi said.
“When there is feeling to serve the poor and the divyaang, then this type of pace comes, then work is done with pace,” he added.
During his over 30-minute address, the prime minister gave an account of government schemes for the differently-abled and senior citizens.
“In the last four-five years, hundreds of streets in the country, more than 700 railway stations, airports have been made convenient for divyaangjan. Those which are left are being linked with Sugamya Bharat Abhiyan (Accessible India Campaign),” he said.
“It was our government, which brought a law that for the first time clearly stated the rights of the divyaangjan. Ours is the first government, which has enacted the Rights of Persons with the Disabilities Act. The benefit of this law was that it increased the ambit of divyaang category from 7 to 21,” he said, adding that reservation for people with disabilities in institutes of higher studies has been increased from 3 per cent to 5 per cent.
The prime minister also said his government was working for the welfare of senior citizens.
“The government launched Rashtriya Vayoshri Yojana almost three years ago, so that poor senior citizens could get necessary equipment. In the past five to five-and-a-half years, cost incurred on treatment of senior citizens has come down substantially as compared to earlier time,” he said.
“In this year’s Budget, a provision was made. Earlier if a bank goes bankrupt, then you used to get only Rs 1 lakh. We changed the law, and amount now is Rs 5 lakh. This will repose faith in banks,” he said.
Modi also said, “A common sign language for the divyaang was never thought of earlier. Our government made efforts for this, and Indian Sign Language Research and Training Centre was established. My speech is also being disseminated in sign language. No one had the time to do this in 70 years. Government websites and currency have been made divyaang-friendly.”
He also informed that a dictionary containing 6,000 words has also been prepared.
At the international level sports events for the handicapped, the performance of the Indian sportspersons has been outstanding, he said.
“A sports centre in Gwalior is being established to tap the talents,” he added.
There are more than 2.50 crore people with disabilities in the country, and over 10 crore senior citizens in the country, he said.
Recalling his earlier visit to Allahabad (now renamed Prayagraj), Modi said, “One always experiences a unique feeling of piousness and energy by coming to ‘Teertharaj’ Prayagraj. I remember it was during last February when I came during the Kumbh.”
In the biggest ever ‘Samajik Adhikarta Shivir’, the Modi distributed assistive aids and devices to nearly 27,000 senior citizens and people with disabilities at a mega distribution camp.
In the mega camp, over 56,000 assistive aid and devices of different types were distributed free of cost to over 26,000 of beneficiaries. The cost of the aids and devices is over Rs 19 Crore.
The objective is to provide assistance through these aids and devices to the daily living and socioeconomic development of the people with disabilities and the senior citizens. (PTI)