HomeTop StoriesEnsure voters with disability are not left out: Diethono
Top Stories
3 years agoNovember 3, 2018No tags 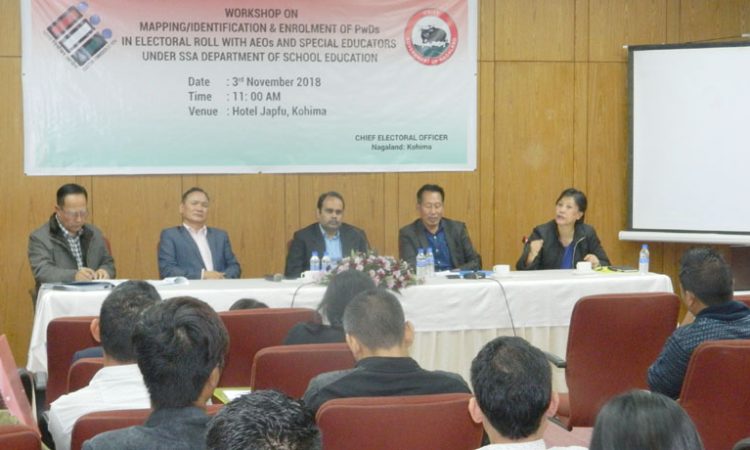 CEO Nagaland along with his officials and Disability Commissioner Dr Atha Vizol and State Icon, Diethono Nakhro during the workshop in Hotel Japfu Kohima on November 3

Kohima, November 3: Disability Rights Activist and State Icon for People with Disabilities (PwDs), Diethono Nakhro today stated that making elections inclusive and accessible is not just about laws and the rule books, but it is about wanting to do the right thing and then reaching out and making that little extra effort to make sure that voters with disability are not left out.
She was speaking at a day-long workshop on Mapping/Identification of PwDs for Electoral Process organized by office of the Chief Electoral Officer (CEO), Nagaland on the theme “Accessible Elections” for Assistant Election Officers and Special Educators from all the districts at Hotel Japfu today.
Dwelling on the topic “Categories of disabilities”, Nakhro said all citizens of India over the age of 18, including people who live with disabilities, have a right to vote.
She, however lamented that with PwDs unwilling to come forward to enroll in the electoral rolls, even politicians and Government seems least bothered about the welfare of PwDs at the polling stations.
Nonetheless, she expressed happiness that the Election Commission of India has made inclusion of PwDs in the electoral process a priority under the slogan ‘No voter to be left behind’. The commission, she said, has developed a strategic plan focused on removal of barriers, motivating, facilitating and enhancing participation by PwDs.
Describing PwDs, she said persons with disabilities include those who have long-term (permanent) physical, mental, intellectual or sensory impairments which in interaction with various barriers may hinder their full and effective participation in society on an equal basis with others.
She said that the first step towards enhancement of participation of PwDs in the electoral process is enrollment.
In this she said that to improve enrollment, better understanding of various kinds of disabilities is important in order to indentify voters with disability.
She said there are 21 disabilities currently specified and recognized under the Rights of PwDs Act 2016, which include blindness, low-vision, leprosy cured persons, hearing impairment (deaf and hard of hearing), locomotor disability, dwarfism, intellectual disability, mental illness, autism spectrum disorder, cerebral palsy, muscular dystrophy, chronic neurological conditions, specific learning disabilities, multiple sclerosis, speech and language disability, thalassemia, haemophilia, sickle cell disease, multiple disabilities including deaf-blindness, acid attack victim and parkinson’s disease.
Giving tips for enrollment, she asked the BLOs to go house to house. Maintaining that many people are still reluctant to admit disability due to the stigma they face and a false sense of shame, she asked them to be patient and try to explain the importance of registering PwDs.
She also said that it is not important whether the eligible PwD has a disability certificate or not but it more important to get them enrolled. People with mental illness must also be enrolled unless their condition is very severe and they have no sense of reasoning.
The workshop has been planned primarily for ensuring that the election officers at the ground level adequately drilled in properly and comprehensively identifying PwDs and thereafter ensuring their enrollment in the electoral roll, said CEO Nagaland Abhijit Sinha during the introductory remarks.
He said that presently only about 2500 PwDs are identified in the E-rolls in Nagaland, which considering the population of the State is very low. He said that there are various reasons for the low enrollment and one major reason would be apathy on the part of the election officials in taking the extra effort to reach out the PwDs. The other reason, he said, would be insufficient training to the BLOs in properly identifying the PwDs.
The CEO said that special educators under SSA School Education Department after getting properly trained would be conducting elaborate trainings at the district level for the BLOs and the BLOs would then be in a good position to carry out the work of identification and enrollment of PwDs.
The CEO thanked Diethono Nakhro and Dr Atha for coming forward for training the special educators as resource persons.
Also speaking on the occasion, Commission of PwDs, Nagaland, Dr Atha Vizol said that Nagaland has a total population of nearly 20 lakh people and according to the 2011 census there are 29,631 Differently Abled Persons/PwDs (DAP/PwDs).
He informed that Nagaland Parents Association for Disabled is the State Nodal Agency Centre (SNAC) for Nagaland under the National Trust, an NGO working under the Union Ministry of Social Justice and Empowerment, beside other NGOs and inclusive schools and institutions working for the welfare of PwD/DAP.
Dr Atha lamented that Nagaland though Christian State has wrongly conceived that PwD/DAP is a curse from God while many have the misconception that disability is a result of some terrible things that ancestors had committed or even that it is a result of sins committed by the parents.
He said that because of such wrong thinking parents of the disabled are often filled with shame and guilt, which leads to isolation, stigma and discrimination of the PwD/DAP.
Nonetheless, Dr Atha said that such behaviours are due to the ignorance of disability and lack of information of the community at large while many children are deprived of timely assistance. (Page News Service)