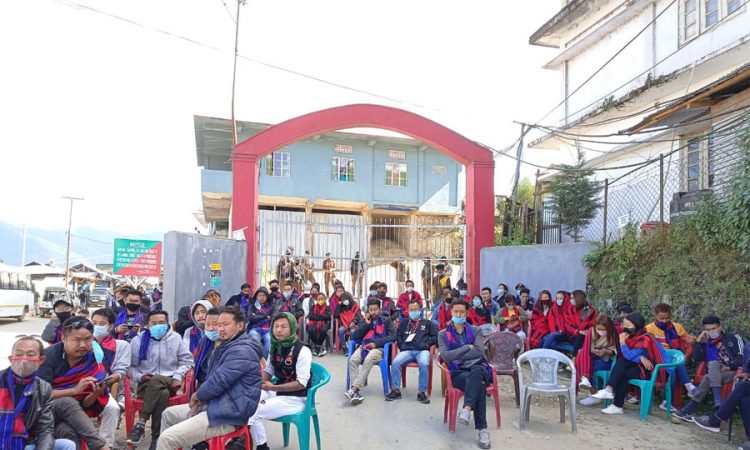 ENSF president, Sepili L Sangtam and assistant general secretary, Khomo P has directed all federating units to reach Tuensang by December 5 for the presidential emergency meeting.
However, the Federation stated that the proposed indefinite agitation would resume anytime as and when the Federation directs.
All ENSF Advisors and former senior leaders have been requested to reach the headquarters.
The ENSF expressed dismay that in spite of the agitation entering the 5th day, the Government is giving a cold shoulder to the demands placed by it, which only shows how concerned and has succeeded time and again in depriving the people of Eastern Nagas of their rights.
Meanwhile, the 3rd phase of the 5th day of the proposed democratic indefinite agitation passed off peacefully and successfully. Locking down of District Administration offices in all the 5 Districts and Sub-Division Offices and also locking down of Government offices and on restriction of movement of Government registered vehicles by the 6 federating units at respective headquarters passed off peacefully.
The Federation further extend their gratitude to the 6 federating units for their continue support and cooperation for the cause.
PRSU:
Following numerous inconclusive meetings, the Pathso Range Students’ Union (PRSU) began indefinite Phase-III agitation within its jurisdiction. As per ENSF’s directive, the agitation was carried out in a peaceful manner and there was no any untoward incident.
There was no office activity at the Panso administrative office.
The PRSU shall follow the directives of Eastern Naga Students’ Federation (ENSF) and Khiamniungan Students’ Union (KSU) for steps to be taken in the following days, a press release issued by PRSU assistant information & publicity secretary, Khumong T stated.
(Page News Service)