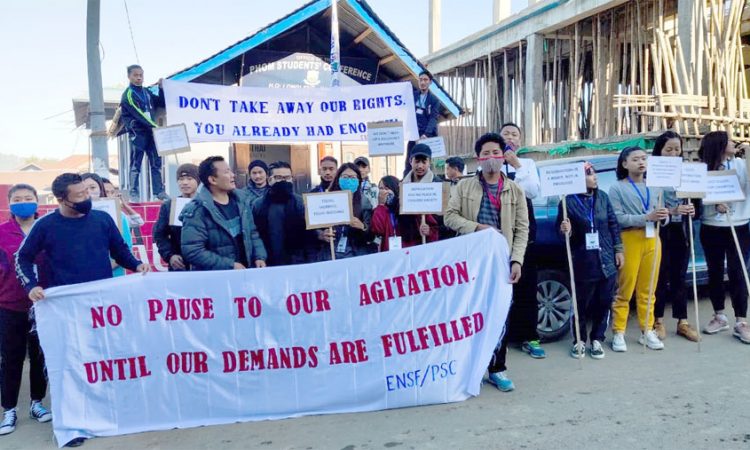 To lock down Govt office in Eastern Nagaland

The Federation, as 2nd phase of indefinite democratic agitation, will boycott the 58th Statehood Day celebration on December 1 and restrict all related activities by not allowing to hoist the flag in all Eastern Nagaland and will boycott the Virtual Hornbill Festival celebration.
The ENSF, an apex students’ body of the 6 tribes of Eastern Nagaland, is demanding, among others, the composition of Nagaland Service Selection Board, the Chairman and 2 members, all the 3 posts should be rotated amongst the recognized Naga tribes of Nagaland on roster basis to maintain fair, justice and equality to all tribes. It has also asked for 45% posts reservation be exclusively earmarked for the 6 tribes of Eastern Nagas comprising the Sangtam, Konyak, Yimchunger, Khiamniungan, Phom and Chang community for 20 years till these tribes reach at par with the rest of the other Nagas after which it shall be subject to review.
In a press release, ENSF president Sepili L Sangtam stated that altogether 11 vehicles were seized today for not respecting the directives issued by the Federation and that the seized vehicles will be released only when their demands are fulfilled.
Meanwhile, in a directive issued to federating units, the ENSF asked the units to lock down Government offices in Eastern Nagaland, while exempting District Administration, Police, Medical, Fire & Emergency services, District Court and Central agencies.
It also directed all Eastern Nagas to refrain from participating in any Government activities. It said the agitation will be strictly implemented in all federating units jurisdiction and no leniency extended to any defaulters.
The Federation appealed to all concerned to cooperate with the democratic agitation and said any unwanted consequence upon its dereliction would be the sole responsibility of the violators.
It further informed that the indefinite democratic agitation would continue until further communiqué from the Federation.
The Confederation of Chang Students’ Union (CCSU) has also directed its federating units to boycott the 58th Statehood Day celebration and restrict all related activities by not allowing the hoisting of flag in all CCSU jurisdictions and also boycott Virtual Hornbill Festival celebrations.
It has also decided to follow the earlier directives of the ENSF.
Meanwhile, interacting with media persons on the sidelines of an official programme here Monday, Deputy Chief Minister, Y Patton said the State Government, through the Chief Secretary, has already requested the ENSF to call off the agitation in the interest of all.
“We (State Cabinet) are going to have a meeting and deliberate on their demands on December 3 and only after which proper decisions would be taken and therefore requested them not to agitate,” he said.

Saying that the Cabinet will discuss their demands, including 45% reservation in Government sector employment on December 3, Patton, however, expressed that “giving 45% reservation would take the total reservation, including that of other backward tribes to 52%, which even the Supreme Court would not allow”. There is a standing Court order that reservation should not be more than 50%, he said.
(Page News Service)