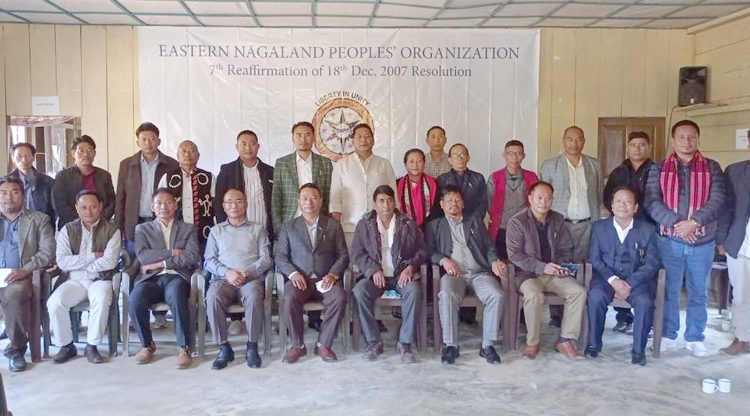 TUENSANG, NOVEMBER 10: The Eastern Naga People’s Organization (ENPO) today unanimously resolved to uphold the December 18, 2007 Tuensang Summit Resolution, which states that there will be no bloodshed, threat, intimidation or any form of violence within its jurisdiction.

The ENPO, in its 7th Reaffirmation at Tobu Town today, further resolved that the public of ENPO will not tolerate and oppose any form of violence such as killing, kidnapping, physical assault, threat, etc., in any matter, both amongst the Naga political groups, on the ENPO and tribal leaders and on innocent public pre-Naga solution and post-Naga solution in the interest of peace and tranquility in the region.
The ENPO also resolved that the unity of the people of Eastern Nagaland shall continue irrespective of tribes or groups.
In case of non-compliance of the resolutions, it was resolved that the public of Eastern Nagaland would cease all forms of cooperation and the ENPO public would take appropriate measures against the group. The ENPO would also reach out and appeal the same to all other Naga tribes.
The summit was a prayerful call to the Naga National Workers from Eastern Nagaland to seriously deliberate on peace and tranquility pre and post political solution.
The summit was attended by representatives of Naga National Workers of Eastern Nagaland from NSCN-IM and 7 Naga National Political Groups, Chang Khulei Setshang (CKS), Khiamniungan Tribal Council (KTC), Konyak Union (KU), Phom People’s Council (PPC), United SangtamLikhumPumji (USLP), Yimchunger Tribal Council (YTC), Eastern Nagaland Goan Bora Union (ENGBU), Eastern Naga Dabashi Union (ENDBU), Eastern Naga Gazette Officers Association (ENGOA), Eastern Naga Students Federation (ENSF), and Eastern Nagaland Women Organization (ENWO).
Meanwhile, silver jubilee consultative meeting was also held after the summit. It was discussed that the ENPO silver jubilee will be held at Tobu in February 2021. It was also made known that Tobu is the birthplace of ENPO. The date for the celebration would be finalized after further discussions and consultations with the tribal bodies.
The earlier Jubilee Planning Committee, which was constituted on February 1, 2019, was cancelled due to the prevailing pandemic. Further it was discussed that the celebration and gathering would be limited to a small number.
During the meeting, the house also unanimously selected the silver jubilee history committee that will bring out a detailed history book on ENPO with W Lemba Chang as convener. A rough budget proposal for the celebration was also collectively discussed.
(Page News Service)