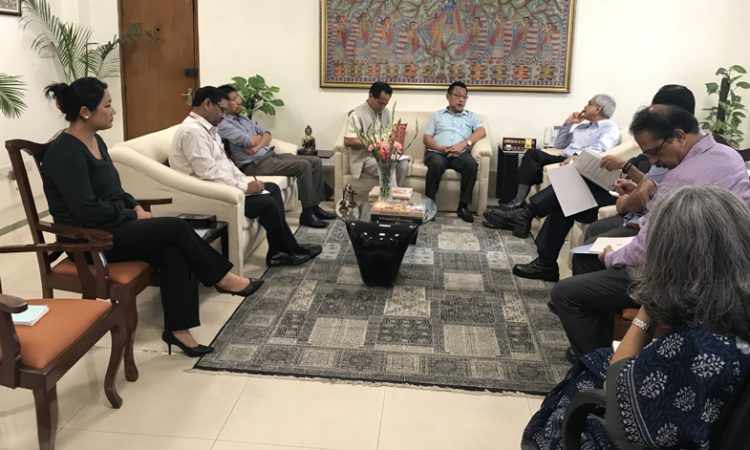 Dimapur, September 13: A three-member delegation of the Eastern Nagaland Legislators’ Union comprising of convenor, S. Pangnyu Phom, Minister H&FW, general secretary Toshi Wungtung, Advisor SCERT & IPR and Bongkhao Konyak, Advisor, DUDA along with officials of the Government of Nagaland called upon Dr Rajiv Kumar, Vice Chairman, NITI Aayog today at New Delhi.
The delegation impressed upon the NITI Aayog the desire of the people of Eastern Nagaland for development of various sectors such as road connectivity, health, tourism, agriculture, etc.
Pangnyu apprised the Vice Chairman of the problems faced by the people of the region and said that the four districts of eastern Nagaland were extremely underdeveloped. He expressed hope that the commitment of Prime Minister Narendra Modi on February 22, 2018 at Tuensang for development of Eastern Nagaland would be taken up by the Government of India with all seriousness.
Advisor SCERT & IPR Toshi Wungtung thanked the Vice Chairman NITI Aayog for giving his time to the delegation to discuss the issues faced by the people of the region. He said that project proposals have been identified on certain thrust areas as per urgency.
Highlighting the dismal state of affairs in the 4 districts which also happen to be among the most remote districts in the State, Wungtung appealed to the Vice Chairman to take up the issues expeditiously.
The NITI Aayog Vice Chairman Dr. Rajiv Kumar welcomed the delegation and asked them to submit detailed project reports on thrust areas so that the NITI Aayog can take it up with line ministries. The Vice Chairman assured to extend all possible help in this regard. (Page News Service)