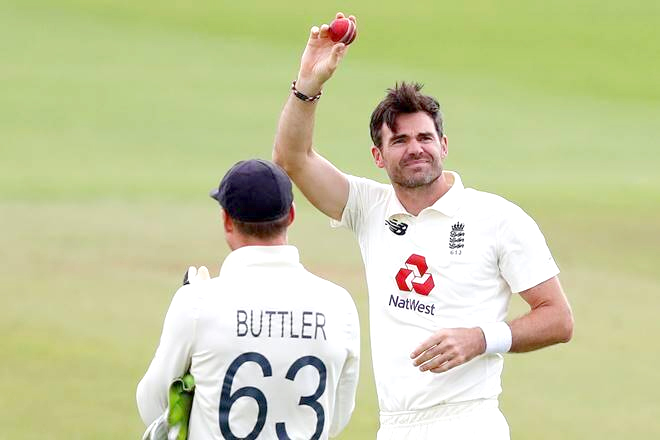 Southampton, August 25: England’s pacer James Anderson on Tuesday (August 25, 2020) became the first fast bowler to reach 600 Test wickets, by picking up Pakistan’s skipper Azhar Ali on the fifth day of the third Test match at Ageas Bowl in Southampton.
He reached the milestone in his 156th appearance and had Azhar Ali caught at slip by his skipper Joe Root.
The 38-year old pacer’s first Test wicket came on his debut against Zimbabwe when he dismissed Mark Vermeulen at Lords in May 2003. He had picked up 5-73 in his first match.
Anderson averages 26.77 and has a strike rate of 56.22 with the best bowling figures of 11/71.
He has 29 five-wicket hauls and has three times taken more than 10-wickets in a match.
Notably, only three bowlers, all spinners, have taken more wickets in tests namely – Sri Lanka’s Muttiah Muralitharan (800 in 133 matches), Australia’s Shane Warne (708 in 145) and India’s Anil Kumble (619 in 132).
Pakistan are now 126-3 with Babar Azam batting on 20 along with Asad Shafiq on 8, still trailing by 184 runs after being forced to follow-on. (Agencies)