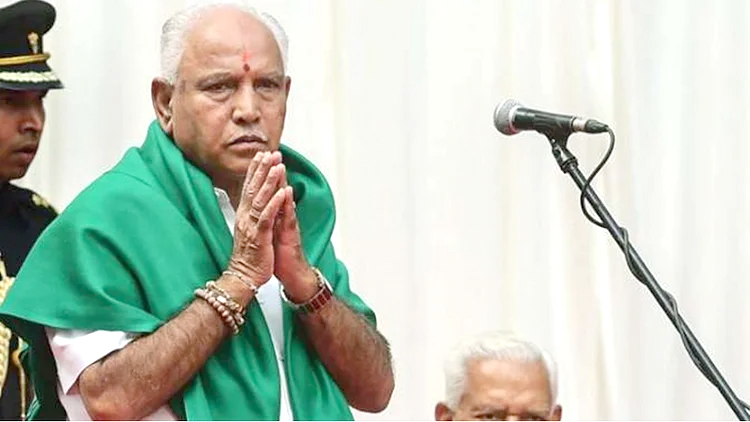 Bengaluru, July 26: An emotional B S Yediyurappa on Monday highlighted his instrumental role in the growth of the BJP in Karnataka, before he resigned as Chief Minister, and described his tenure as “trial by fire”.

Interestingly, the 78-year-old leader used the event, organised to mark his government’s two years in office at Vidhana Soudha, the seat of state legislature and secretariat here, as the platform to announce his resignation, while maintaining that he will continue to work for the party and the people.
“Don’t take me otherwise, with your permission…I have decided that- I will go to the Raj Bhavan and submit my resignation as the Chief Minister to the Governor,” he had said at the end of his over 20-minute speech in a choked voice, as he repeatedly turned emotional.
“Not out of grief, but with happiness,” he said, as he thanked Prime Minister Narendra Modi, Union Home minister Amit Shah and BJP national president J P Nadda for giving him an opportunity to serve as Chief Minister for two years, despite completing 75-years of age.
There is an unwritten rule in the BJP of keeping out those above 75 years from elected offices.
He later submitted his resignation to Governor Thaawarchand Gehlot at the Raj Bhavan, which was accepted.
Recalling the circumstances under which the BJP came to power with him as the CM, Yediyurappa said he will strive to bring the party back to power, either with or without any position, by getting 125-130 seats during the 2023 polls, in the 225 member assembly.
Describing his term as “trial by fire”, he said, “when I took charge (as CM 2 years ago), I was not allowed to form the cabinet by the Centre (by the BJP central leadership), there was drought and then there was flooding and I had to travel everywhere alone.. later the cabinet was formed, and then in the last one-and-half year there is COVID.”
“Despite facing repeated trial by fire, with cooperation from everyone, I have worked efficiently for the welfare of the state and brought in a change…I have put in efforts beyond my limit for this,” he added, as he thanked his officers.
Thanking the BJP’s central leadership, Yediyurappa, in what is also being seen as his farewell speech, said no one was given the opportunity to hold any position after crossing 75-years of age, but he was allowed to become CM for two years, despite crossing that age bar.
“My prayer to God is only that Narendra Modi and Amit Shah should win and come back to power to serve the country and make India strong, this is the opinion of the people too,” he said.
Beginning his speech by noting that today’s developments are being keenly watched by the people of the state and the country, Yediyurappa recalled that there was a time when no one was ready to talk to him or other workers, when he was working to build the party in Shikaripura taluk (his constituency) by organising marches from nearby areas.
“We also had no one in the assembly then and I was alone as the other party MLA Vasantha Bangera quit. I never turned back or worried that I was alone and continued to work in a way that people liked….,” he said.
He recalled his work as RSS pracharak at Shikaripura in Shivamogga, and his tenure as Purasabha president.
Recounting a “fatal” attack on him while he was on his way to office, when he was the Purasabha president, he said, “they (miscreants) thought I was finished and left.”
“When my wife and children came to meet me, I told them that my future life is dedicated to the people of the state..,” he said, expressing satisfaction at having achieved that.
He then remembered his days as Jan Sangh worker and taking part in farmers’ and dalit movements, and said “I want to humbly submit that these kind of work to strengthen the organisation has led me to this position.”
Recalling that Atal Bihari Vajpayee, when he was the Prime Minister, asked him to become a central minister, Yediyurappa, turning emotional, said, he told Vajpayee that he wanted to build the BJP in Karnataka and for “no reason I will come to Delhi” and urged him to allow him to build the party.”
He said, there was a time when there was great difficulty to gather even 300-400 people, when leaders like Vajpayee, L K Advani or Murli Manohar Joshi toured the state.
“But, I travelled across the state to build the organisation and with the cooperation of national leaders, it resulted in the growth of the party to the level it is in power today.”
Thanking the efforts of lakhs of people in the growth of the party, the BJP veteran said there was a time when they had no car and he and other leaders travelled on bicycles to build the party.
“I feel surprised when I think today that when there was no one, we tried to build the party.Today the party has grown strongly,” he said laughing, taking the names of his long-time party associates including Minister K S Eshwarappa.

Highlighting that there is a loss of trust among people, towards public representatives and bureaucrats, Yediyurappa appealed to them to work honestly for the progress of the country and the state. (PTI)