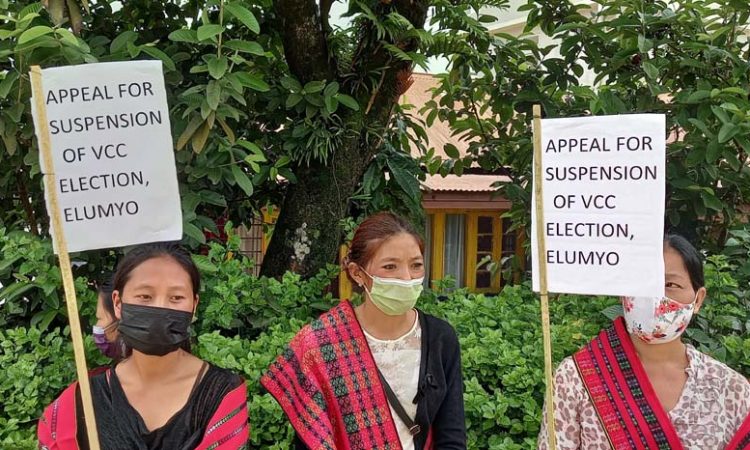 DIMAPUR, JULY 12: A group of women at Elumyo Village in Wokha District has appealed to the Deputy Commissioner of Wokha to suspend the process of council chairman election at the village.
In a representation submitted to the DC on Monday, the group of women from Elumyo explained the circumstances behind their appeal.

“Expressing serious concern and deep anguish over the incident that took place at Elumyo Village on 6th July 2021, i.e. the day of VCC election, we deem necessary to give a brief account of the circumstances responsible for the incident and ensuing situation in the village, without prejudice to any party.
“The final audit report and findings of the Social Audit Committee prompted large section of the community to demand for General Meeting to address the issue of misuse of public fund before VCC election, which was intimated to the Head GB and all the GBs through written statement, which is perhaps a general norm in the best interest of the community. Serious discontentment arose within the village when the GBs decided to conduct the VCC election without considering and addressing the serious issues involving the larger interest of the community”, it read.
Consequently, on the day of election, a group of people along with the supporters of an intending candidate, L Zubenthung Tsanglao, gathered outside the community HALL to boycott the VCC election “through democratic agitation”, it stated.
While in the course of agitation against the VCC election, “fuelled by the unilateral decision of the GBs to conduct the VCC election at different venue, i.e. old community hall”, a confrontation took place between the agitating party and supporters of another intending candidate, C Zumomo Tsanglao, resulting in a series of grievous injuries to certain individuals, it informed.
Subsequently, both sides filed their respective FIRs at Wokha Police Station, and “significantly”, the FIR lodged by the GBs against Zubenthung Tsanglao and his supporters “including innocent agitators”, had led to arrest and custodial detention “causing further sense of discord and enmity within the community”, it added.

“Considering the seriousness of the prevailing situation, any attempt to conduct the VCC election at Elumyo Village by the authority concerned before addressing the issue in demand would only aggravate further discontentment and may even result in more damages, both in terms of property and human life, and hence shall be deemed as ‘misdemeanour’ for which the authority concerned shall be held responsible. Having apprised of the situation, we, humbly implore upon your esteem and competent authority to kindly consider our appeal in the best interest of the community”, it further read.
The representation was appended by ‘Lumdeno Yanthan and others’.
(Page News Service)