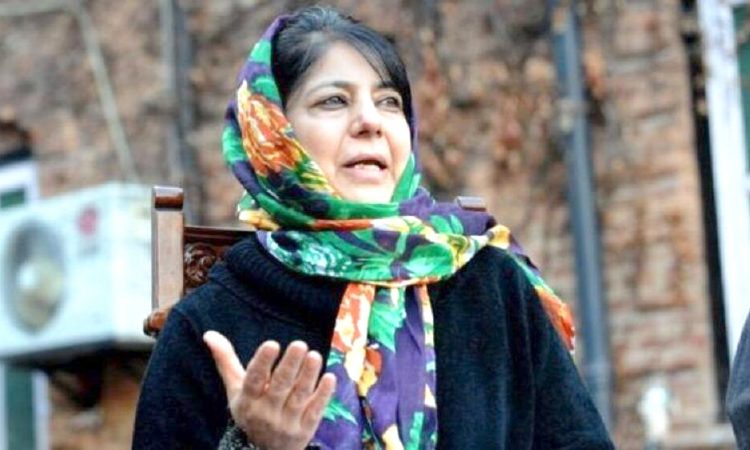 Srinagar, November 29: PDP president Mehbooba Mufti on Sunday said elections are no solution to the Kashmir problem and called for a dialogue between India and Pakistan to address the issue.

She also accused the BJP-led government at the Centre of murdering the democracy in the name of District Development Council (DDC) polls as alliance candidates were being confined to homes while others enjoyed full freedom to campaign.
“Election is no solution to the Kashmir problem. There should be a dialogue between the two countries. If we are talking to China, which has taken our land, why not with Pakistan? Is it about being a Muslim country because everything is communal now,” Mehbooba told reporters at her Gupkar residence.
The former chief minister was not allowed to address a press conference on Friday after police prevented her from visiting PDP youth chief Waheed Para’s residence in Pulwama district following his arrest over alleged connections with Hizbul Mujahideen.
Asked about the significance of Saturday’s poll percentage, Mehbooba said poll percentages have been huge before also, but that is not a solution to the Kashmir issue.
“India has around nine lakh security forces here. Which other state has so much of security forces in the civilian areas? If (abrogation of) Article 370 has resolved all issues, why is the army still stationed in Kashmir? They should have gone to the border.
“Participation in elections has no bearing on the Kashmir issue. It is there and it will be there as long as it is not resolved through dialogue with Pakistan and the people of Kashmir,” she said.
The PDP chief said the alliance candidates were not allowed to freely campaign for the DDC polls.
“Our people do not have security. They have been confined to their homes and not allowed to run poll campaign while BJP candidates are freely roaming around. This is not done? Will this country run on the BJP’s agenda?
“They tell us not to talk about Article 370. BJP ministers visit Kashmir and nine out of 10 times, they talk about the revocation of Article 370. I fail to understand that when they are confident that Artilce 370 is gone and will not be restored, why do they get rattled so much when I speak about it,” she said.
Mehbooba said there was no freedom to talk about issues.
“Whosoever tries to raise voice is booked under UAPA. There is no greater a peace-loving person than Waheed, but he has been booked under the UAPA. This is very unfortunate what is happening here,” she said.
Referring to her house arrest on Friday, Mehbooba said fiction was being portrayed as reality in Kashmir.
“It is unfortunate that after I was detained, the Election Commission and other officers said I was not under detention. It tells you what is happening in J-K, what is fiction and what is reality. Fiction is portrayed as reality and reality is not shown,” the PDP chief said.
She said the repression has increased in J-K since “we decided to contest the polls”.
“They have made a joke of democracy. There is anda kanoon (blind law ) across the country. Muslims are dubbed as Pakistanis, Sikhs as Khalistanis, activists as urban Naxals, students, including girls, as anti-nationals. Women protests are also termed anti-nationals. I want to ask BJP that if everyone is anti-national and terrorist, then who is Hundustani in this country? Only BJP? They are dividing this country like anything, she said.
On the Roshni issue, Mehbooba said it was not a scam but a scheme for the poor.
The real scam is the electoral bonds. Let them investigate it. If BJP is so serious about the land grab issue, it should go after big fish, not the poor who have not even five marlas of land in their possessions. Notices are being sent to the poor. One such notice is with me, she said. (PTI)