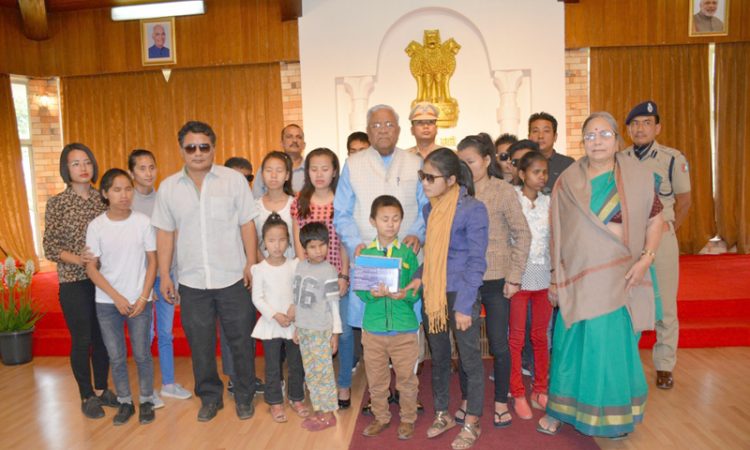 Dimapur, April 24: Nagaland Governor, PB Acharya has stated that although Government schools in the State usually attract students from poorer communities, but this should not stop them from achieving education.
“Education is the key role in the progression of a society. Schools and colleges gives you knowledge on how to progress in life,” he said.
Speaking at an outreach programme at the Raj Bhavan, Kohima for students from Visually Impaired School, Nutun Basti, Dimapur and Government Middle School, Officers’ Hill, Kohima, the Governor stated that education should not be self-centred but it should make an individual enrich the society. This should be the mind set of all the students in Nagaland, he said.
Acharya also insisted that the system of education in Nagaland should change. “In today’s world, simple graduation will not suffice,” he said. Youths should think of the State and try to bring different ways to empower and employ the people of Nagaland, he added.
Also speaking in the programme, SP Kohima, Sendongmeren, IPS advised the students to be sincere in their studies and to work hard since there is no shortcut to life. He urged the students not to bunk classes and to avoid using social media sites since they would hamper their concentration. He further asked them to abide by the laws and also to always respect their elders.
Head teacher, GMS School, Mimi Yhoshu expressed gratitude to the Governor and his wife for adopting the GMS school. She said that the visits by wife of the Governor to their school has always been encouraging, not only to the students but also to the teachers.
(Page News Service)