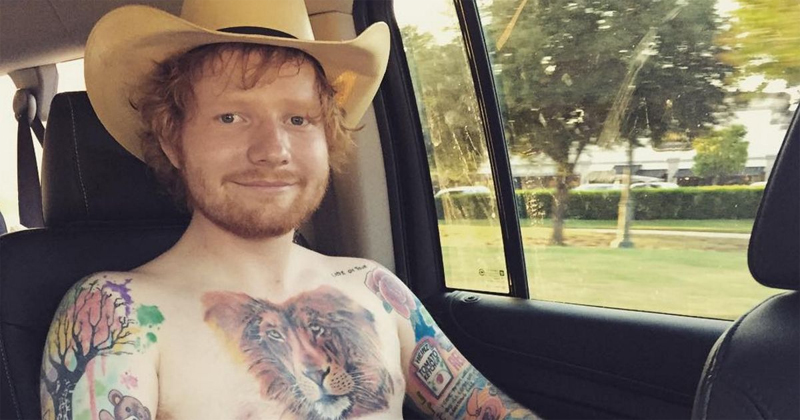 Superstar Ed Sheeran’s lion tattoo is such a roaring success that the design is worth a six-figure sum.
Yet artist Kevin Paul may turn down a £300,000 offer for the rights to the inking from a millionaire high street magnate.
Kevin said the 2015 tattoo had attracted so much attention and the Thinking Out Loud singer, 27, was thrilled by it.
Ed said: “England’s national emblem is a lion. All my tattoos are things that I’ve done in my career and they’re all leading to the middle bit which is the lion. I think it looks cool, I don’t really care if anyone else does.”
Kevin said he felt conflicted by the offer as the tattoo was a gift to Ed. He said: “It was a personal thing. He is my mate and I don’t really charge mates.”
Kevin, who has tattooed singers James Arthur, Harry Styles and Rihanna and model Cara Delevingne, said Ed’s lion tatt had been a last minute thing.
He said: “We only went down to his for my wife’s birthday and he spoke about getting a lion done at some point. So I drew that up that night and we ended up doing it the next morning.”
Ed proved to be a loyal friend to Kevin when his wife suffered two miscarriages.
Kevin said: “I opened up to Ed one day and the next he messaged me to say he had paid money into my account as a gift and didn’t want paying back.
“He basically saved me and my family and I will never forget that.
“I would like to pay him back one day but either way I will always be eternally grateful and love him for what he did.”
Kevin, based in Melbourne, Derbyshire, said although Ed’s management have agreed to the tattoo’s artwork being sold he didn’t think he would take the offer from a “millionaire” who is “responsible for a lot of high street brands”.