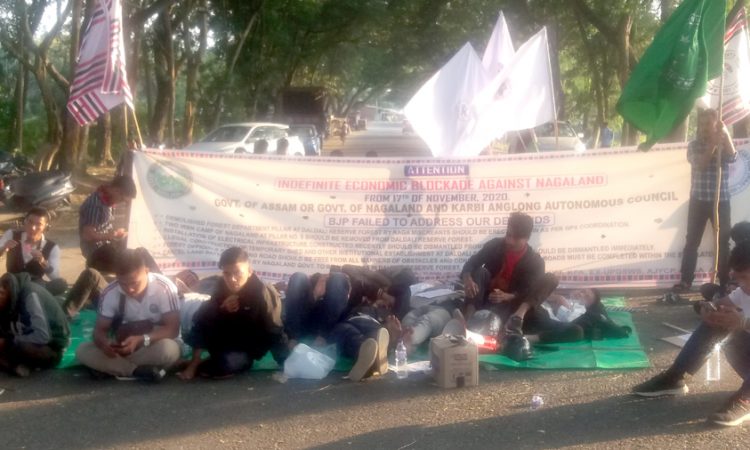 Sources from Diphu said that DC Karbi Anglong has invited the agitating organizations for talks on Wednesday at 2 p.m.
Earlier in the morning, the Karbi organizations launched the economic blockade at National Highway 26 in Hanjanglangso, near Sarihajan, some few kilometers from Bokajan and National Highway 39 in Dillai. Due to the blockade, hundreds of goods laden trucks and oil tankers were stranded at both places.
Members of the Karbi organizations were seen with banners staging a dharna at Hanjanglangso, sitting on the road protesting peacefully. Assam Police personnel were also seen talking with the agitators to lift the blockade as talks between and Assam and Nagaland were going on the controversial issue.
Although trucks and oil tankers bound for Nagaland were stopped at Hanjanglangso and Dillai, private vehicles and buses were allowed to ply.
A police officer at Hanjanglangso told Nagaland Page that Deputy Commissioners of Dimapur and Karbi Anglong held a meeting in Dimapur and discussed about the alleged encroachment of land at Daldali by the Nagas. He informed that during the meeting it was decided at all kinds of constructions activities at the disputed site would be stopped immediately and status quo would be maintained.
He said that some people from Nagaland had obtained pattas for the land at Daldali and had started construction, which were opposed by the Karbi organizations, who had been demanding to stop such activities.

The organizations, which launched the economic blockade include the Karbi Students Association (KSA-Bijoy Bey), All Dimasa Students Union, Karbi Longri NC Hills Liberation Front, Karbi Students and Youth Council and Karbi Farmers Association.
Karbi Unemployed Youth Association, UKYA, JACAS, AATSA, KAWJF, HPYA, UKAWA, KYJ and former United Peoples Democratic Solidarity, Students and Youth Council and Asom Jatiyatabadi Yuva Chatra Parishad (AJYCP) are some of the other organizations that have supported the economic blockade.
DDCF appeals to Govts of Nagaland & Assam
Dimapur District Citizens’ Forum (DDCF) has appealed to the Government of Nagaland and Assam to resolve the border problem at the earliest.
In a press release, the DDCF stated that the indefinite economic blockade which started on November 17 has been imposed by the Karbi Students’ Association in collaboration with other civil organisations of Karbi Anglong demanding immediate solution to the border issue.
It urged the Government of Nagaland to take the matter seriously and immediately find a solution with its counterpart.
It also cautioned that no business community should take advantage of the blockade to raise the price of the commodities. (Page News Service)