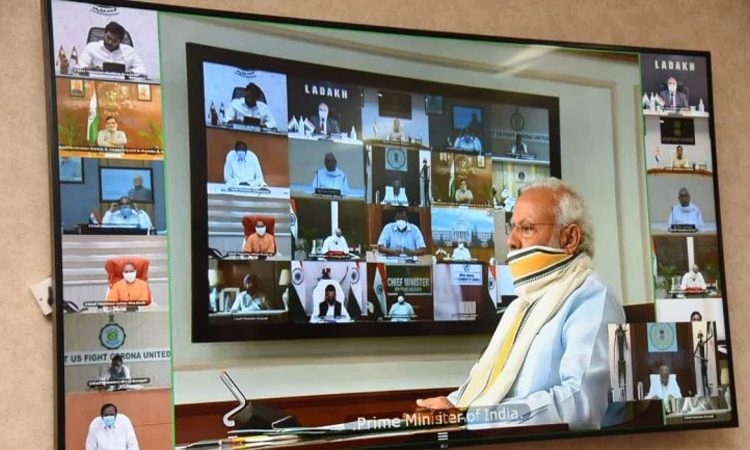 New Delhi, May 11: Economic activities in India are set to “gather steam”, Prime Minister Narendra Modi told chief ministers on Monday, while asserting that the country will have to devise a “balanced strategy” to revive the economy and deal with COVID-19 with a sharp focus on ensuring that rural areas remain free from the pandemic.
The thrust of the video conference with all state chief ministers was to chalk out a comprehensive roadmap, with a focus on strengthening the COVID-19 containment strategy and stepping up of economic activities in a calibrated manner as the 54-day nationwide lockdown nears an end. India is under a lockdown since March 25 which is scheduled to end on May 17.
During the meeting, which lasted for nearly six hours, Modi and the chief ministers held extensive discussions on various aspects of the situation arising out of the pandemic and the nationwide lockdown, with the prime minister telling them that the future path for the country will be determined on the basis of the suggestions by the states.
According to official sources, Modi told the chief ministers that the biggest challenge for the country will be to ensure that the infection does not spread to rural India following relaxation in lockdown norms which included allowing movement of migrant workers.
At the same time, he emphasised that India will have to devise and implement a “balanced strategy” to deal with the pandemic and step up the economic activities in a gradual manner.
Noting that slowly but surely, economic activities have started in several parts of the country, the prime minister said in the coming days, the process will gather steam.
The interaction comes in the midst of growing demands by states, industries, workers and several political leaders to withdraw the lockdown from non-COVID areas as it has adversely impacted the economy and livelihoods of a large section of people.
According to a Delhi government official, during the interaction, chief minister Arvind Kejriwal said barring containment zones, economic activities should be allowed to resume in the national capital.
“During the interaction, the chief minister said economic activities should be allowed to resume in Delhi, except in COVID-19 containment zones,” a source told PTI.
Punjab Chief Minister Amarinder Singh pitched for the extension of the coronavirus lockdown, but demanded a carefully crafted exit strategy, including fiscal support to states.
In view of the increasing number of coronavirus cases, continuation of the lockdown was needed, Singh said, adding the decision on designating red, orange/yellow and green zones should be left to the states, which are more cognizant of the ground realities.
The exit strategy should consider and focus on fiscal and economic empowerment of the states, the Punjab chief minister said.
In the conference, Tamil Nadu Chief Minister K Palaniswami came out against the resumption of flight and passenger train services till May 31, citing increase in the number of coronavirus cases.
Maharashtra Chief Minister Uddhav Thackeray urged Modi to show “specific and concrete direction” on the lockdown, a state government official said.
During the interaction, Modi also appreciated the role played by the states in the fight against the pandemic, and said the entire world is of the view that India has been able to successfully protect itself from the pandemic, according to official sources.
The “problems” have increased wherever the social distancing norms were not followed or there has been laxity in implementation of the lockdown guidelines, Modi told the chief ministers.
Reacting to the Centre’s decision to resume a limited number of passenger services from Tuesday after an almost a 50-day hiatus, West Bengal chief minister Mamata Banerjee said on one hand, it wants strict enforcement of the lockdown, on the other, it is resuming train services.
According to officials, Modi said it was essential to make best efforts to ensure that people stay where they were during the lockdown, however, in times like these people wish to go home and therefore, a change in decision had to be made.
Going forward, the prime minister said, the road ahead should focus on reducing the spread of the infection and ensuring that all precautions are taken by people including social distancing norms by following the mantra of “do gaz doori (six feet apart)’.
He said the Centre now has a reasonably clear indication about the geographical spread of the pandemic including the worst affected areas which is helpful in containing the pandemic.
The interaction was attended by Defence Minister Rajnath Singh, Home Minister Amit Shah, Finance Minister Nirmala Sitharaman and Health Minister Harsh Vardhan among others.
The last interaction the prime minister had with the chief ministers was on April 27. And days after the meeting, the central government had extended the lockdown by two more weeks till May 17 to arrest the spread of the virus, but gave several relaxations in economic activities and movement of people.
According to the Union health ministry on Monday, India registered a record jump of 4,213 COVID-19 cases in a single day, taking the total number of COVID-19 cases to 67,152 with a death toll of 2,206, (PTI)