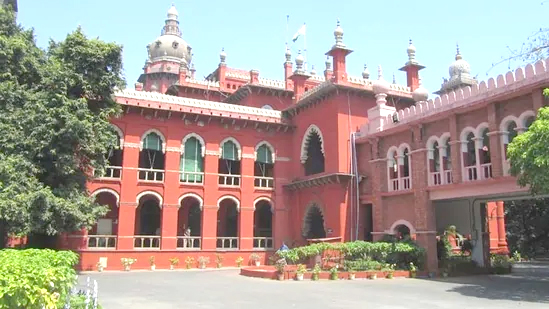 The Madras High Court was hearing a petition on facilities to ensure that Covid-19 safety norms are followed during voting in Tamil Nadu's Karur constituency. (File Photo / PTI)

Chennai, April 26: The Madras High Court on Monday castigated the Election Commission over the COVID-19 second wave in the country, holding it ‘singularly’ responsible for the spread, called it the “the most irresponsible institution” and even said its officials may be booked under murder charges.

The EC allowing political parties to take out rallies and meetings had led to the spread of the pandemic,the court said.
The first bench of Chief Justice Sanjib Banerjee and Justice Senthilkumar Ramamoorthy made the stinging observation on a public interest writ from Karur AIADMK candidate and Transport Minister M R Vijayabaskar for the April 6 Assembly polls, seeking a direction to authorities to ensure fair counting of votes on May 2 in Karur by taking effective steps and proper arrangements with COVID-19 protocols.
Since as many as 77 candidates are contesting from Karur constituency, it would be very difficult to accommodate their agents in the counting hall. It may affect observance of the protocols, the petitioner alleged.
When counsel for the EC told the judges that all necessary steps were underway, the bench shot back saying that by allowing the political parties to take out rallies and meetings, it (Commission) had paved the way for the resurgence of the second wave of the deadly virus.
Irked over the submission of the EC counsel that all precautionary measures would be taken at the counting centres, the Chief Justice replied that the EC must be ‘singularly’ held responsible for the second wave of the pandemic spike in the country.
The bench even said that EC officials may be booked under murder charges.
The judges also orally warned that they would not hesitate to stop the counting of votes on May 2.
On Sunday, Tamil Nadu reported 15,000 new covid cases, while its active cases are in excess of one lakh.
Elections had been held in four states–Tamil Nadu, Kerala, Assam and West Bengal and the union territory of Puducherry and the counting of polled votes will be taken up on May 2.
While voting is over in all the other states, the seventh of the eight-phase polling in West Bengal is underway on Monday, with the last phase scheduled on April 29.
Earlier, the Calcutta High Court had expressed dissatisfaction with the EC over the enforcement of COVID-19 health safety norms during the ongoing West Bengal assembly election process, including campaigning.
On April 22, hearing three public interest litigations (PILs) seeking enforcement of Covid protocol during the polls, a division bench presided by Chief Justice T B N Radhakrishnan had said issuance of circulars and holding meetings on Covid safety were not enough.

It later directed the competent authorities to make the people of West Bengal abide by the restrictions imposed by the Commission on public behaviour regarding protective protocol for Covid-19 in the state, which also has witnessed an alarming rise in infections. (PTI)