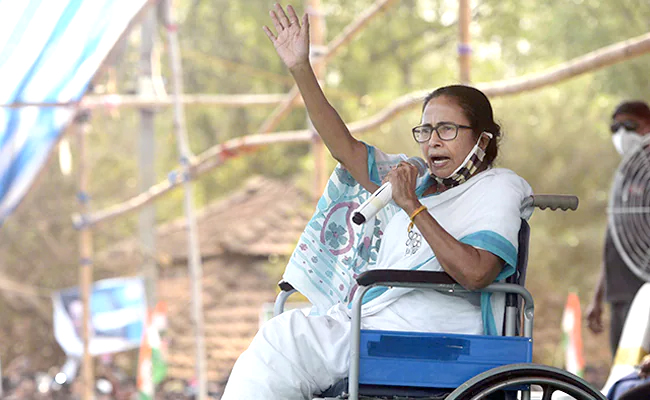 New Delhi, April 12: Mamata Banerjee was banned from campaigning in Bengal for 24 hours this evening over speeches that the Election Commission said violated the poll code. The Chief Minister was accused of breaking the law with her comments on Muslim votes and for allegedly urging voters to revolt against central security forces.

Mamata Banerjee announced a sit-in protest against the ban. “To protest against the undemocratic and unconstitutional decision of the Election Commission of India, I will sit on dharna tomorrow at Gandhi Murti, Kolkata from 12 noon,” she tweeted.
The ban till 8 pm on Tuesday – outgoing Election Commissioner Sunil Arora’s final order – comes half-way through the Bengal election, with four more rounds of voting left in an intense campaign pitting Mamata Banerjee against a galaxy of BJP leaders including Prime Minister Narendra Modi.
The Bengal Chief Minister, 66, had been served two notices last week by the Election Commission, which said her replies to them betrayed “selective amnesia”.
She was asked to explain her speeches on March 28 and April 7, allegedly accusing central forces of intimidating voters and urging women to hit back or surround the security personnel.
“Who gave so much power to them that the central police are threatening the women without allowing them to cast their votes? I saw the same thing in 2019, I saw the same thing in 2016,” she said during the March rally.
“I know under whose instruction they beat up people and how they beat up. It is your duty to save the families of the people. If any of our mothers and sisters suffer a single strike with the stick, attack them with ladles, spuds and knife. I am telling you. It is the right of women. And if any of our mothers and sisters are denied entry in the voting compartment all of you come out and revolt,” she allegedly said.
In Cooch Behar, she made “highly objectionable remarks” on the Central Reserve Police Forces (CRPF), said the election body.
“If the CAPF (Central Armed Police Forces) create disturbances, I tell you ladies, a group of you go and restrain (gherao) them while another group will go to cast their votes. Don’t waste your vote. If you engage yourself only in restraining them they will be happy that you did not cast your vote. This is their plan. This is the plan of the BJP. And your plan will be that you will not be scared if they try to intimidate you coming to your village on the one hand, and on the other you just talk to them,” the Chief Minister said.
The Election Commission called these “false, provocative and intemperate statements” that “vilified” central forces and had caused “extreme demoralisation” in their ranks.
In another notice, the Chief Minister was accused of “openly demanding votes on communal grounds”.
“… I am requesting my minority brothers and sisters with folded hands… don’t divide the minority votes after listening to the devil… who had taken money from the BJP… He passes many communal statements and initiates clashes between Hindus and Muslims… comrades of the CPM and BIP is roaming around with money given by BJP to divide the minority votes,” Ms Banerjee had said while campaigning in Hooghly district on April 3.
Her response to both the notices were defiant.
Ms Banerjee’s Trinamool Congress blasted the Election Commission, dubbing it “Extremely Compromised” – not for the first time.

Ms Banerjee has had a running feud with the Election Commission in these polls. She was earlier warned over a “factually incorrect” complaint over voting in Nandigram, where she faces her aide-turned-BJP rival Suvendu Adhikari.
The results of the Bengal election will be declared May 2. (ndtv)