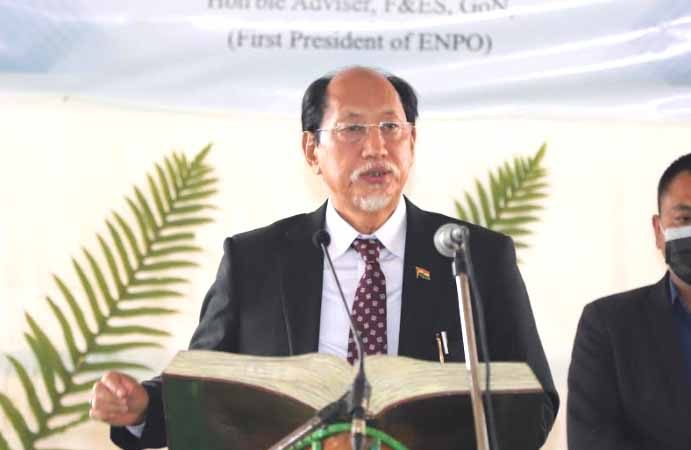 Asks Eastern leaders to invest in their own districts

DIMAPUR, FEBRUARY 24: Chief Minister Neiphiu Rio on Wednesday maintained that while the areas of eastern Nagaland are called backward due to shortfalls in infrastructure and deficits in human development parameters, the people are not in any way backward. Speaking at the silver jubilee celebration of Eastern Nagaland Peoples’ Organization (ENPO) at Tobu town in Mon district, the chief minister further advised “leaders and capable personalities” of the region to invest in their own districts to enable growth and development.

Rio pointed out that the five eastern districts, namely Tuensang, Mon, Longleng, Kiphire and Noklak has a population of 7,71,344, which is 28.8% of the State’s total population. The geographical area covers 6027.3 sq km which is 36.34% of the State, and the literacy rate is 68.7% against the State’s 79.5%, he added.
“Last year, the government schools in Delhi achieved 98% pass percentage during the board exams, which is the result of the sincere efforts made by the government teachers. We can also attain such feat if we honestly execute our assigned works. I would also like to encourage individuals, organizations and churches to give focus on setting up private educational institutions so that it will help in equipping young minds to face the outside world with ease and new perspectives,” he said.
The chief minister went on to state that the basic parameters of human development and progress are quality education, reliable healthcare, sustainable economy under an environment of political and social stability.
“We must make efforts towards realization of these aspects and I urge the leaders and capable personalities of the eastern regions to take proactive decisions to invest your resources in your own districts before looking towards Kohima, Dimapur and beyond. Investments will create economic growth, generate employment and open new opportunities for the youth. We must keep in mind that, while the government has a great role to play, it must be supported side by side through people’s initiatives and private enterprise,” he reminded.
Rio also encouraged Government employees and professionals to be willing to work and serve in “your own difficult areas, as it is a universal fact that we have to build our own nation with our own hands”. Nobody else will come and do it for us, he said.
According to the chief minister, eastern Nagaland needs special focus to bring it on par with the rest of Naga society as early as possible. “In the past decade and a half, we have undertaken several measures to address these needs. Creation of three districts and new administrative circles, institution of a dedicated development department and increased funding for development are some initiatives we have undertaken successfully,” he said.
‘Democratic aspiration’
The chief minister further said that the desire of Naga people to live under a common administrative umbrella as members of the same family is “democratic” and must be pursued in a peaceful manner.
He asserted that people of the eastern region play a crucial and central role in the Naga family. Apart from being one of the larger sections within Nagaland, he pointed out their communities also inhabit neighbouring districts in Arunachal Pradesh and across the international border in Myanmar.
“Destiny and our adversaries have kept us divided while manmade boundaries have kept us separated from each other,” he said, adding that the people should work for “addition rather than subtraction”.
The chief minister stated that the unresolved Indo-Naga political imbroglio remains the most important issue before Naga people.
The prolonging of the political negotiations, the delay in finding an early solution and the continuation of the deadlock has created hurdles and challenges in achieving progress and development…Naga society has been bogged down due to the political conflict and it’s high time we break free from the shackles of conflict and violence so that Naga society too can join the rest of the global community in seeking the common goals of human progress,” he said.
(Page News Service)