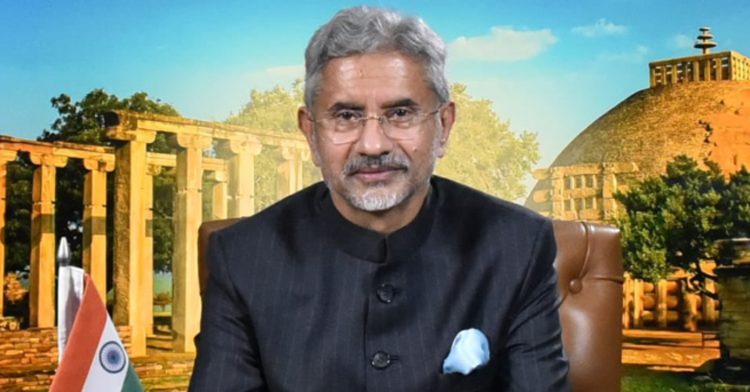 New Delhi, November 14: In an oblique message to China, India on Saturday expressed concern over “actions and incidents” that “erode” trust in the South China Sea, and underlined the importance of adhering to international law, respecting territorial integrity and sovereignty.

In an address at the 15th East Asia Summit (EAS), External Affairs Minister S Jaishankar also talked about the Indo-Pacific and noted the growing interest in the region as an integrated and organic maritime space with 10-nation ASEAN at its centre.
The external affairs minister, referring to recent announcement of policies by several countries for the Indo-Pacific region, said that harmonising various perspectives would never be a challenge if there is commitment to international cooperation.
The summit, held in the virtual format, was chaired by Prime Minister of Vietnam Nguyen Xuan Phuc in his capacity as chair of the ASEAN and all the EAS member nations attended it. India is generally represented at the summit by the prime minister.
In his address, Jaishankar also underlined the need for greater international cooperation in the post-COVID world to tackle the challenges cutting across national boundaries such as terrorism, climate change and pandemics, the Ministry of External Affairs (MEA) said.
The East Asia Summit is a premier forum in the Asia-Pacific region dealing with issues relating to security and defence. Since its inception in 2005, it has been playing a significant role in the strategic, geopolitical and economic evolution of East Asia.
Apart from the 10 ASEAN (Association of Southeast Asian Nations) member states, East Asia Summit includes India, China, Japan, Republic of Korea, Australia, New Zealand, United States and Russia.
The MEA said Jaishankar re-affirmed the importance of the EAS as the leaders-led forum to exchange views on strategic issues and spoke of the “importance of adhering to international law, respecting territorial integrity and sovereignty, and promoting a rules-based global order”.
His comments on the need for respecting territorial integrity and sovereignty came in the midst of the bitter border row between India and China in eastern Ladakh and Beijing’s increasing expansionist behaviour in South China Sea and Indo-Pacific.
“On the South China Sea, the external affairs minister expressed concern about actions and incidents that erode trust in the region,” the Ministry of External Affairs said.
China claims sovereignty over all of the South China Sea, a huge source of hydrocarbons. However, several ASEAN member countries, including Vietnam, Philippines and Brunei, have counter claims.
In the midst of the coronavirus pandemic, China has significantly ramped up military offensives in the South China Sea in the last few months, triggering global concerns.
India has been pitching for promoting a rules-based order in the region including through upholding adherence to international law, especially the UNCLOS (United Nations Convention on the Law of the Sea).
“He stated that the Code of Conduct negotiations should not be prejudicial to legitimate interests of third parties and should be fully consistent with UNCLOS,” the MEA said in a statement.
On the Indo-Pacific, it said: “The external affairs minister noted the growing interest in the Indo-Pacific as an integrated and organic maritime space, with ASEAN at its centre. He appreciated the synergy between the ASEAN Outlook and India’s Indo-Pacific Oceans Initiative.”
He said India was equally positive about the Indo-Pacific policies announced recently by other nations.
At the East Asia Summit in Bangkok last year, Prime Minister Narendra Modi proposed setting up of the Indo-Pacific Ocean’s Initiative (IPOI) to conserve and sustainably use the maritime domain and to make meaningful efforts to create a safe and secure maritime domain.
The concept is gaining traction with Japan already agreeing to be the lead partner in the connectivity pillar of the IPOI.
Referring to the COVID-19, Jaishankar briefed the EAS leaders about India’s response to the pandemic and highlighted India’s efforts to support the international community. He reiterated Prime Minister Narendra Modi’s commitment to help make the COVID-19 vaccine accessible and affordable to all nations.
The MEA said the leaders underlined the importance of cooperation in ensuring safe, effective and affordable access to COVID-19 vaccines.
“They called for greater cooperation in keeping the global supply chains open for an expeditious and sustainable economic recovery. Regional and international issues such as South China Sea, the situation in Korean peninsula and Rakhine state were also discussed,” it said.
The summit issued a declaration and also adopted four statements on marine sustainability; epidemics prevention and response; women, peace and security; and steady growth of regional economy, the MEA said. (PTI)