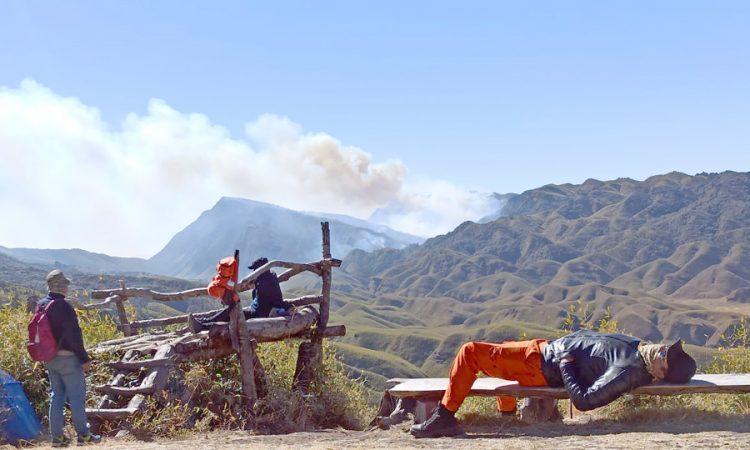 A NSDMA official resting against the backdrop of the Dzükou fire after a hard day's work on Day 8.

“Seeing the tremendous joint efforts by all concerned to tackle the situation, I am hopeful that the fire will soon be doused,” Chief Minister Neiphiu Rio said in a tweet after making an aerial survey of the latest forest fire situation at Dzukou valley during the day.
“The destruction of God-given beauty and resources of the Dzukou valley is sad,” Rio lamented while expressing hope that everyone will strive to support the efforts of preserving and promoting the rich biodiversity of the valley and learn to live in harmony with nature.
OSD of Nagaland State Disaster Management Authority, Johnny Ruangmei said that the operation to douse the fire completely was expected to end today but presently it is not safe to call off the operation as a joint aerial survey of the Dzukou forest fire observed that the fire has not been totally controlled and it continues to burn at multiple locations.
The main problem in controlling the fire is that during the night hours, when operation is not carried both by air and land, somewhere flame starts and the gusty wind carries the fire sparks erupting fresh fire at multiple spots, otherwise the fire would have been doused completely days ago, he said.
This has resulted in fire breaking out even within the magnificent Dzukou valley, he said.
In this, he said, “We have decided to reinforce 3 more units of NDRF from anywhere and requested the Ministry of Home Affairs. We will also reinforce personnel from the State including Home Guards and Civil Defence, Police and local volunteers,” he said.
The service of 4 IAF choppers will also continue to spray water from air in the hill sides while manual efforts would be made by the ground staff to fight the valley fire on Wednesday, he said.
Meanwhile, a total of 176 personnel from various agencies are engaged in containing the spread of the fire on January 5 and 7 sorties were carried out by 1 p.m. Tuesday
SDPO Kohima, Vitoshe K Sumi said, till January 4, the fire was within the Elephant Gate area and there were moments where it came close towards the valley but the fire line exercise carried out by the fire fighters prevented the fire from further spreading into the valley. However, with strong eastward winds from the west the fire had spread to the Tevirü Range by January 5, he added.
The Tevirii range is to the Southwest of the Dzukou base camp.
Also on the same day, a special review meeting was held at the Dzukou base camp led by Deputy Commissioner Kohima, Mohammed Ali Shihab A, along with SP Kohima, Manoj Kumar, District Disaster Management Authority Chairman, officials from Southern Angami Youth Organization (SAYO) and Southern Angami Public Organisation (SAPO) officials, State Disaster Management Authority (SDRF), National Disaster Management Authority (NDRF), Forest Department and various stakeholders.
DC Kohima said, “At present there is a multiple approach is going on, with India Air Force (IAF) carrying out sorties and fire line cutting exercise being carried out at the same time.”
A collective decision was also taken to ask the State government to increase the number of sorties from IAF, he added.
A recce team was formed today and they have already been dispatched to the spot to assess and inspect the fire as it was getting closer to the main valley from the South-western side of the range, he said.
The Deputy Commissioner also informed that a decision was also taken to increase the strength of 80 personnel at the base camp to 100 personnel. The personnel on standby will be ready to respond to any kind of situation, he added.
A collective decision was also taken to ask the State government to increase the number of sorties from IAF
It was also agreed upon by all the participants of the meeting that efforts should be made to completely douse the fire as its spread toward the western side will lead to a very dangerous situation.
A NDRF official also informed that there are three NDRF teams based at the Dzukou Valley in Nagaland side. The NDRF along with the help of its sister agencies like SDRF, Police and SAYO is doing its best to douse the fire at the earliest. NDRF is well equipped and trained and is capable of tackling any kind of challenge.
“We are also taking pre-emptive steps and within a day or two, we will douse the fire,” he added.
Earlier during the day, Chief Minister Neiphiu Rio, conducted an aerial survey of the ongoing fire at Dzukou Valley.

Advisor Medo Yhokha said that the Chief Minister was seriously concerned about the fire situation after witnessing the level of damage from the aerial survey. Yhokha also shared that the terrain and the unpredictable nature of wind at the valley is one of the biggest challenges in regard to the efforts made to douse the fire.
The State Government has donated Rs.10 lakhs to the civil societies that are currently fighting to bring the fire under control. With Southern Angami Public Organisation being the parent body of all the other organisations in the Southern Angami area, the cheque was handed to them.
(Page News Service)