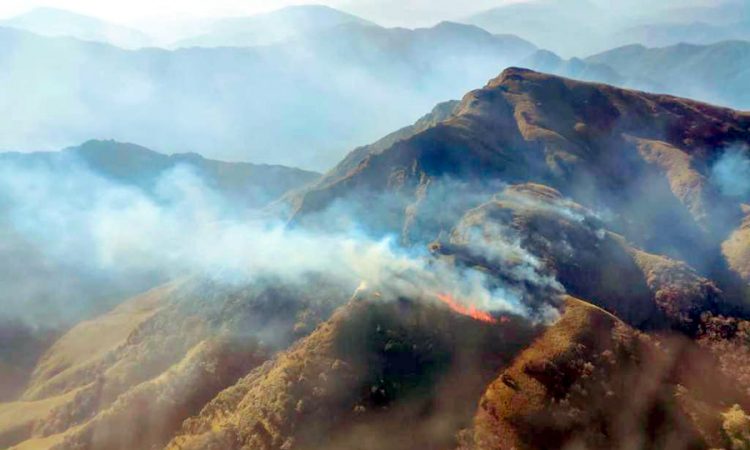 Kohima, January 4: The blazing fire in Dzukou range in Southern Angami region of Kohima District continued for the seventh day on Monday, official sources said.
Dzukou Valley under Kohima district is famous for its multi-coloured carpets of natural flowers and greeneries which make it a hub of biodiversity, flora and fauna. It has been on fire since December 29, 2020.

The firefighting continued on Monday with 78 personnel from police, forest and NDRF and around 50 volunteers of Southern Angami Youth Organization (SAYO) on ground operation for fire line cutting, said Divisional Forest Officer, Kohima, Rajkumar M.
‘Bambi Bucket’ operations by IAF choppers and fire line cutting are continuing to protect the valley, he said, adding that the situation is under control but the fire is still raging.
The DFO informed that on Sunday evening when fire was descending towards Dzukou Valley, Range Forest Officer Kohima and SDPO (South) led the entire team and started cutting fire lines on both sides of a stream and then used the water available to physically douse the fire, which was successful.
OSD for Nagaland State Disaster Management Authority (NSDMA) Johnny Ruangmei said personnel of the Forest Department, NDRF, SDRF, Police and volunteers of SAYO have been camping in the valley to keep watch.
He said that personnel of SDRF, Home Guard and Civil Defence, NDRF, Police and Paramilitary supported by DDMA, Kohima and DFO and volunteers from SAYO have been working to make traditional fire control line to protect the fragile portion of the valley.
The fires in the Dzukou range are relatively controlled as on Monday, he said, adding that operations may be demobilised depending on the final assessment of the fire situation to be carried out by IAF team along with NSDMA officials on Tuesday.
Saying that the uniformed personnel on the ground with the help of local volunteers would continue making the fire control line, he said NSDMA in collaboration with GIS and Remote Sensing, Nagaland shall be deploying UAV (drone) for area damage assessment.

Meanwhile, Nagaland Chief Minister Neiphiu Rio took to twitter informing, “Tomorrow, I will be making an aerial survey of the latest forest fire situation at Dzukou valley that is spreading across Nagaland and Manipur. There has been a joint effort to tackle the situation and the Nagaland side is more or less under control.”
IAF hopeful of completely extinguish Dzukou fire by today: DC Kohima
(Page News Service)