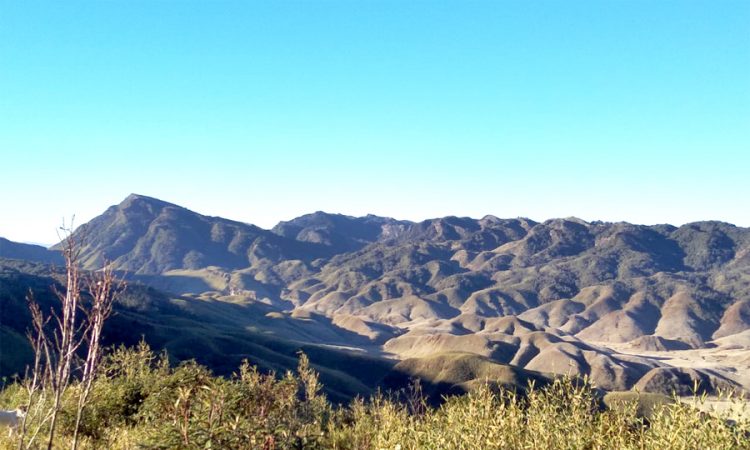 KOHIMA, JANUARY 8: Bringing respite to the more than 10 days’ operations to douse the Dzukou Range fire, under Kohima district, Divisional Forest Officer (DFO) Kohima, Rajkumar M on Friday said the situation is totally under control but all the operations will continue.

Dzukou Range, which cradles the magnificent Dzukou valley has been burning since December 29.
“Now the situation is totally under control but all the operations will continue,” Rajkuamr said.
Almost 300-strong ground operation team comprising of the National Disaster Response Force, State DRF, Home Guards & Civil Defence, Police and Southern Angami Youth Organisation (SAYO) volunteers camped at the base camp and the 4 IAF choppers continued the operations in the effort to completely douse the fire today, he said.
Maintaining that no active fire was noticed during the day, except smoke emanating in 3 places, which he said the ground team physically doused.
It is already more than 10 days since the fire began but the big coordination between the Centre and State agencies has brought the situation under total control, he said.
DFO, Kohima, said both air and ground teams are constantly monitoring the situation and since it is a ground fire we don’t want to take any chance.
Asked if IAF choppers services have been called off with no new fire sites, he said they will continue to drop the essential supplies for the campers and also conduct aerial survey and bambi bucket operations.
The operations will continue on Saturday, the DFO Kohima added.
Meanwhile, Kohima District Disaster Management Authority (DDMA) reviewed Friday’s Dzükou fire operation, under the chairmanship of Deputy Commissioner and Chairman DDMA Kohima, Mohammed Ali Shihab A (IAS), in his office chamber here.
The meeting reviewed the entire operation activities of Dzukou fire Operation.
Reiterating on the ban imposed on jungle burning order, which is issued time to time by the DC’s Office, Shihab also reminded his area Administrative Officers to strictly implement the order in their respective areas.
Giving the updates during the meeting, SP Kohima, Manoj Kumar informed that as per the report of the Ground Operation team camped at Dzukou base camp, no active fire or smoke were visible from the camp site till 8:30 a.m. in the morning, however after few hours some smoke were notice at 3 locations with low intensity and no fire.
Accordingly, the team were mobilized to go to the sites and physically doused off the fire successfully at 2 locations, he said.

However due to the distance factor accompanied by rough terrain and unavailability of tracks, the team could not reach the third location, which is located on the extreme ridge visible from the camp site with no fire, he said.
SP, Kohima, informed that the team will assess the situation and carry out operations as planned on Saturday.
(Page News Service)