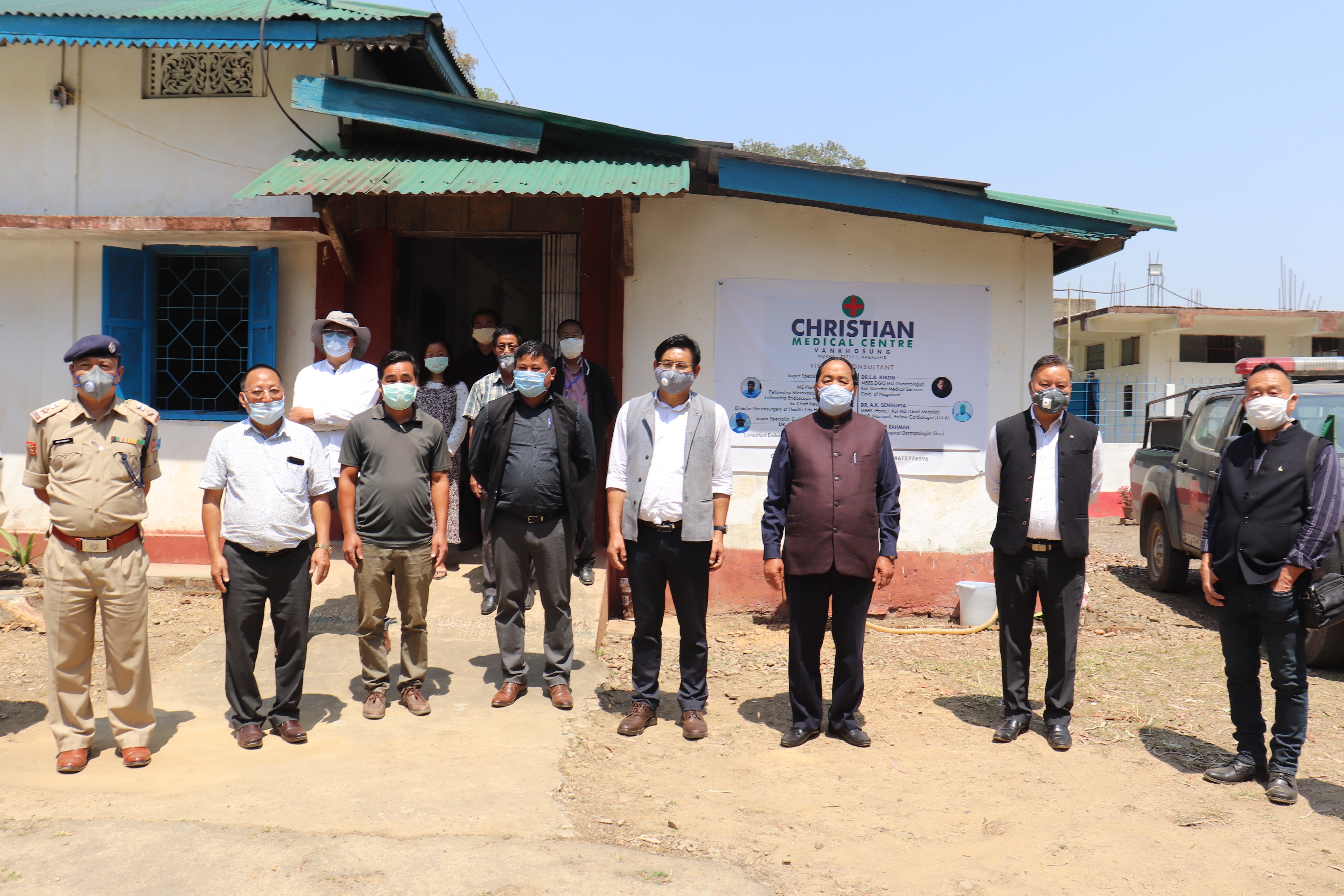 Dimapur, April 1: In order to the meet the immediate requirement to fight COVID-19, Deputy Chief Minister, Nagaland Y Patton contributed 4000 face masks and 1500 plus hand sanitizers which was handed to the Wokha District Administration on Wednesday. He also informed that one cargo from Delhi has already reached the state for distribution in the entire district.
He was accompanied by Advisor for Horticulture & Border Affairs Mhathung Yanthan and MLA, Dr.Chumben Murry visited Wokha district to take first-hand information about the preparedness level under taken in the district.
During his visit, Patton appreciated the commendable job done by District Administration, Medical Department, Police, NGOs and Civil Societies to combat against the fight for COVID-19. Informing during the meeting held at DC conference hall, Patton said, the Chief Minister of Nagaland has already directed all the district DCs, SPs and Medical department to follow the good example set by our district and directed them to work out plans like Wokha district. He also lauded all concerned involved who are working tirelessly 24X7 to defeat this pandemic disease.
Patton, while appealing to the citizens to maintain social distancing, further added that Wokha district in particular needs to approach cohesively as it is bordering Assam state which is mostly porous and if need additional forces will be provided to man the inter-state/district check gate.
Patton also stated that the Government has already procured rice amounting to about Rs. 5 crore for free distribution to the needy people which will be handed through the ADS & DA where he appealed to them to distribute it judiciously.
Regarding grievances and requirements of the district in combating COVID-19 the Home Minister urged to submit the requirements in written which will be intimated to the government. He also requested the Chairman DPDB, Wokha and DC to procure one Ambulance for the district hospital from the Common Pool.
Advisor, Mhathung Yanthan urged all to work as a team and work in close coordination to combat Corona virus and urged the department concern to give timely update. He also requested doctors to be in respective place of posting failing which stern action will be initiated against those absentees.
Yanthan also requested WTC to come out with strategies as panic of buying essential commodities are going on.
MLA, Dr.Chumben Murry who also spoke during the meeting shared opinion concerning the safety of the people during such health emergencies and suggested for disinfesting public places.
Lotha Hoho Chairman also announced that they have procured 350 face mask, 150 hand gloves and sanitizers which will be handed over to DA and assured to extend fullest cooperation to the government authorities to fight the disease.
Chief Medical Officer, Wokha Dr. C W Tungoe and Medical superintendent (MS) while giving the latest status on the preparedness for COVID-19 said the district has seven health units quarantine facilities, 12 isolation facilities, 5o isolation bedded and 120 quarantine bed. So far 1080 people are screened till 31st March and one sample has been send to Imphal (Manipur) and the result is awaited.
Deputy Commissioner, Wokha Orenthung Lotha, appraised the Dy.CM and his team on the preparedness taken so far, where he said that orders have been issued regarding DOS & DONTS and for maintenance of public decorum and social distancing. A short video clipping from the DC, CMO and Executive Secretary LBCA to educate the people have also been made.
The team also visited District hospital isolation rooms, quarantine facility centre and CMC hospital. Later the Advisor accompanied by Deputy Commissioner visited Bhandari and Sanis Sub-division. (Page News Service)