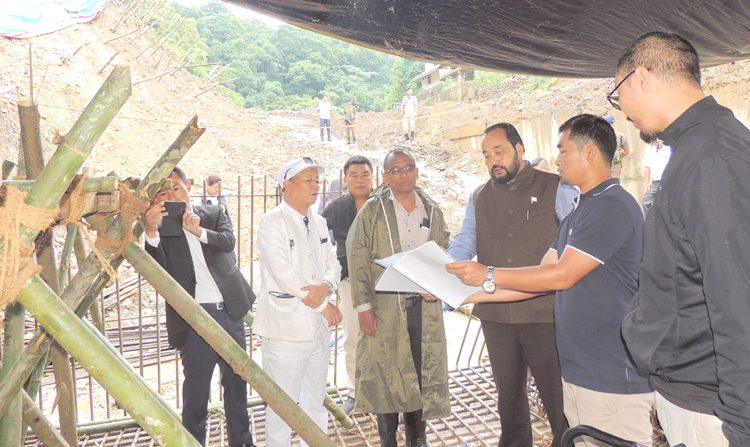 Reiterates contractors have to take care of roads for 3 years

Kohima, July 31: Nagaland Deputy Chief Minister, Y Patton has instructed the contractors constructing the first ever four-lane arch bridge in the State to work hard to complete the work within stipulated time.
The Deputy CM told this to the contractors at the construction site while conducting physical inspection of work progress of the four-lane arc bridge after taking over charge of Roads and Bridges department.
Patton as the Dy CM is also holding Home, while he was given charge of Roads and Bridges and relieved of National Highways on July 23 by Chief Minister Neiphiu Rio.
The ongoing arch bridge over Sanuorü river connects the State Civil Secretariat with the main town. The road was washed away during the 2016 monsoon.
Expressing happiness on the progress of works, the Deputy CM asked the contractors to make efforts to complete the bridge by March-March 2020 as it is the lifeline connecting the administrative heads of the State.
The bridge is being funded under the Central Road Fund with an amount of Rs 20 crore, informed Chief Engineer of Roads and Bridges Department, Limanaro, who was also present at the site.
Nonetheless, she said that the Centre has not released funds while the contractors Vilelie Khamo and KC Angami are presently doing the works without receiving any fund.
She said that the work progress has been slow because of channelizing of the river while the actual work for bridge construction started only in May this year and currently with the onset of monsoon season there has been frequent mudslides occurring.
She however was hopeful that the works will pickup pace once the foundation of the arch bridge reaches a strong level and to hold the bridge over the river to connect the road.
Meanwhile, replying to queries from media-persons potholes developing in some portion of newly repaired road within the capital town, Patton reiterated that as per the new norm of the government, the contractor should take care of the road for a minimum period of three years after completion of the works.
Nonetheless, Chief Engineer Limanaro informed that the Kohima Town City Roads improvement works is still in progress but due to monsoon season use of bitumen during this season is not advisable.
“We have not issued completion certificates and therefore the roads which have developed pot holes will have to be rectified by the contractors,” she said.
On the poor condition of Razhü Point-D Block-Phoolbari road, she accepted that road has become bad, and went on to clarify that it is not because of faulty construction by the contractors but because of the other departments not properly mending the road after digging it for their own purpose. (Page News Service)