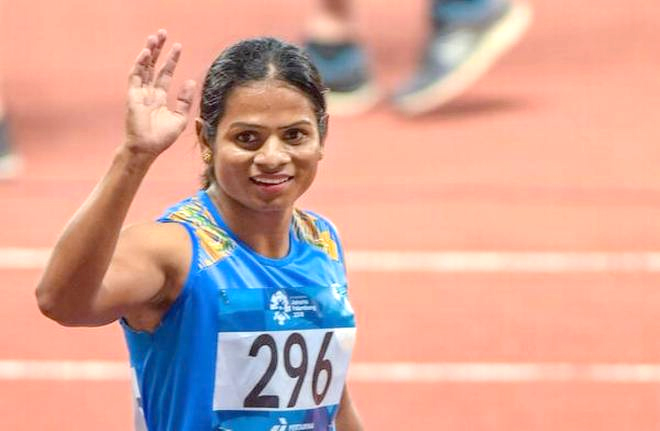 New Delhi, June 16: An Olympic qualifying spot within her grasp, national record-holding sprinter Dutee Chand on Wednesday said her target in the upcoming Tokyo Games is to reach the 100m final with an improved timing.

Dutee is yet to breach the qualification timing of 11.15 seconds but is expected to make it to the Tokyo Games on the basis of world rankings. Out of the 56 athletes to compete, 33 will be those who touch qualification timing and the remaining will be picked on the basis of rankings.
The 25-year-old, who has a personal best of 11.22 sec, is currently 42nd in the World Athletics’ Road to Tokyo list, which also includes those who have already qualified on the basis of entry standard timing.
The qualification deadline is June 29 and the final list of entries will be published on July 1.
“I will try my best to touch the 11.15 sec standard during the Indian Grand Prix 4 on June 21 and the National Inter-State Championships (June 25-29). If not, I am expecting qualification on the basis of rankings,” Dutee said in a virtual press conference.
“My aim in Tokyo is to run below 11.10 seconds and qualify for the final round. Olympics is the biggest event, there will be a lot of athletes who run around 11 seconds and below that,” said the runner who was roped in as brand ambassador of Senco Gold and Diamonds company as part of its initiatives for the LGBTQ community.
Dutee rued missing the World Relay Championships in Poland in May and two competitions in Kyrgyzstan and Kazakhstan this month due to travel restrictions on the Indians in view of the COVID-19 situation in the country.
“There have been a lot of changes in training competition schedule (due to pandemic). I am disappointed to have missed the international events but we can’t do anything.
“Our (4x100m) relay team could have already qualified for the Olympics had we taken part in the World Relays in Poland. All four of us can run below 11.60 and could have run below 43.05,” said Dutee who is currently at the national camp at NIS Patiala.
Sixteen teams will compete in the women’s 4x100m relay in the Olympics and the country occupying the 16th spot in the Road to Tokyo has a timing of 43.05 seconds.
India is currently in 22nd spot with 43.81 achieved during the 2019 Asian Championships.
She said the next one month will be crucial for her in terms of training as she aims to improve her timing.
“Training-wise as well as diet, it is going on perfectly at the NIS. It is minimum six hours training everyday, besides other workouts at the gym, swimming and lifting of weights. I train between 6 and 10am, rest in the afternoon and then training again from 6-8pm in the evening.
“I started speed training from February, running 60m, 80m and then 100m. Even a 100m run during training is repeated six times. My coach told me my stamina has improved, so I can improve my timing,” said Dutee who won a silver each in the 100m and 200m events in the 2018 Asian Games.
Asked about the controversy arising out of her relationship with a woman from her village in Odisha, she said, “Is it a crime to love another person? Some may love another person of opposite sex and some may love another person of same sex. Where is the problem?

“I am being seen by some as somebody who creates controversy. But it is about one’s choice. I love my partner who is a woman and she loves me also. I have not forced her. We want to settle down together in life. (PTI)