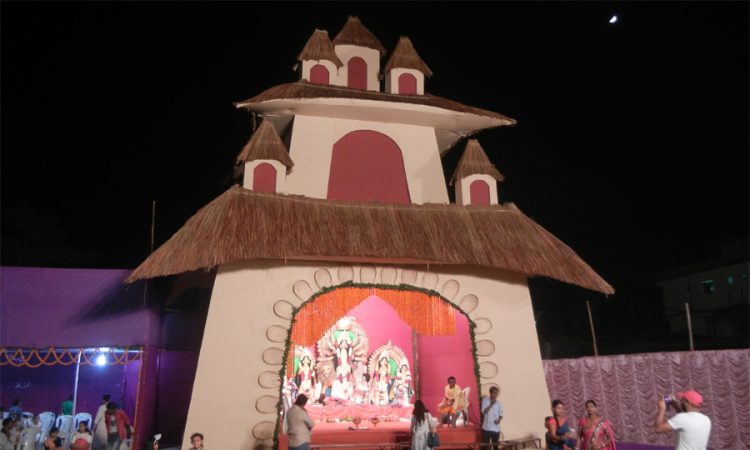 Dimapur, October 16: Reverberation of the sounds of traditional dhak (drums) at various puja pandals mesmerized the devotees as they offered prayers to Goddess Durga on Mahasaptami on Tuesday, marking Durga Puja celebrations in Dimapur.
Though the number of devotees was not very big today, but those who came out of their homes to seek blessings from the Goddess were full of zeal and enthusiasm.
Altogether 53 puja committees have set up puja pandals in and around Dimapur this year with simple but attractive designs enough to draw crowds. While no common theme was chosen this year, the Puja Committee made it clear that the puja pandals are eco-friendly.
The district administration and the traffic department have made elaborate security and traffic arrangements during the puja. Sensing a huge crowd congregating at Durga Mandir on all the puja days, the area has been declared ‘no entry’ zone from all sides, thus allowing pedestrian movement to the temple and other puja pandals.
Durga Puja is also being celebrated in other parts of the state.
Earlier, in the morning Dimapur Bongs organized a ‘puja parikrama’ (pandal hoping) in which the group moved around the city on two wheelers clad in traditional attires visiting the Durga puja pandals put up at different locations of Dimapur. The parikrama’ started at around 10:30 a.m.
Prior to the parikrama, the group held a formal programme here at Lhomithi Colony puja pandal in which the different themes of the parikrama were unveiled. The programme was attended by chairman of PNF Fr. Joe, liaison officer of DMC Ganesh Sharma besides others.
Speaking on the occasion, Ganesh Sharma said that Dimapur is a place where every community and religion observes the festivals of each other and it should continue to show the world the unity of the city. Fr. Joe in his brief remark urged for a tobacco free society.
The different themes of this year’s parikrama were ‘No one deserves a dirty road, think before you litter’, Technology is a useful servant but a dangerous master’, ‘Say no to tobacco’ and ‘Swachhata Hi Seva’.
During the parikrama, the group of about 100 participants visited a total of twenty pandals.
In the meantime, the puja committees are hoping huge turnout of devotees on Mahaashtami and Navani on October 17 and 18 respectively and are well prepared for the situation.
On October 19, the immersion of idols will take place at Immersion Ghat under the supervision of Hindu Seva Samiti, which has requested all puja pandals to assemble the Clock Tower by 8 a.m. on Friday. (Page News Service)