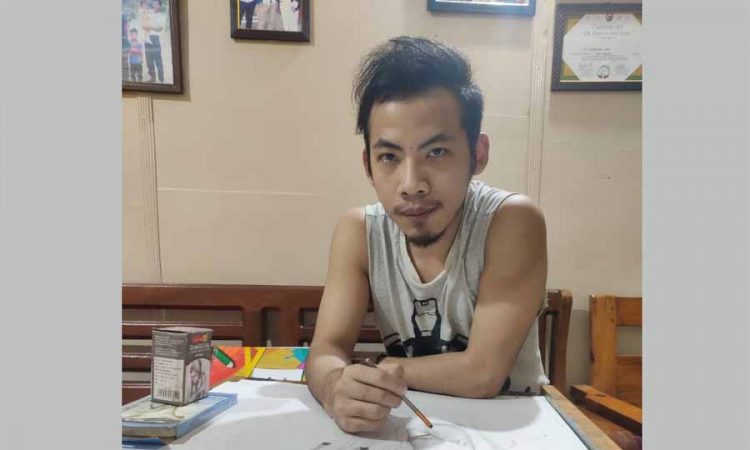 Meshinshe Jamir
DIMAPUR, FEBRUARY 28: Twenty-five-year-old Nokmachier L Jamir was born deaf and didn’t realize his speech impairment for a while, which resulted in him thinking everyone is the same.

It was only later when he saw his family and friends communicating that he understood the need for sign languages and aids to communicate with them. It was also when he realized that he was different from others.
Born at Ungma village in Mokokchung district, Nokmachier did his schooling at Deaf Biblical Ministry, Naharbari, Dimapur. Currently, he is a Class XII student of National Open School, Mokokchung.
As a child, he wanted to be a soldier, and since the age of 8 he would draw pictures of soldiers with guns on his notebooks and every piece of paper he could find.
That was how his passion for Art developed even as his parents and siblings encouraged him to draw portraits and animations.
What started off as a hobby has now turned into a goal to become a professional artist, Nokmachier told Nagaland Page recently. He used text messages, interspersed with sign language and gestures, to communicate with this reporter.
When he realized his disabilities, Nokmachier shared, he was upset at first and questioned everything. It created a barrier as he faced difficulty in expressing his feelings and thoughts, which resulted in him throwing tantrums around the house.
Despite all of this, he was quick to point out, his family was always there and never gave up on him.
In 1999, when he was just 3, his parents took him to Delhi hoping to ‘find a solution’ for his hearing impairment but to no avail. Gradually, they started communicating with their own ‘homemade sign language’, as it was the only way they knew at that moment.
Nokmachier shared that attending Deaf Biblical Ministry was an eye-opener for him as he realized that he was not alone. It made him realize that ‘God has a plan for every individual, and he was destined to be the way he is’.
There he learnt, made friends and became a part of a community that moulded him to be the person he is today.
His parents and siblings are his greatest inspiration, he said, adding that most parents tend to neglect their impaired children but his parents left no stone unturned to get him an education and help develop his passion for Art.
As a kid, he used pencils to draw but his parents ‘understood his passion and recognized his talent by providing all required tools and materials’. This, he said, was the biggest motivation.

When he started, Nokmachier drew portraits of friends and families and slowly began to get customers from different places. The most exclusive, he shared, was a particular costumer from the United States of America who saw his work online and bought it.
He said that he doesn’t want to be a liability to his parents just because he is disabled, but wants to earn his own livelihood through Art.
According to him, securing 1st runner-up title at the ‘Art Competition for Specially Abled Persons’ during Hornbill Festival 2019 was the gateway to explore more of his talent.
The Care and Support Society, Mokokchung promoted his paintings and artworks in March 2020 at Bengaluru and he received the Award of Excellence in Art, Samarthya 2019-2020 from Collective Action for Basic Rights Foundation-CBRF.
Also, he participated in the online art competition for the Deaf Artists 2020, organized by the Odisha Deaf Art Society and was adjudged in the ‘Gold Medal Category’ on September 9, 2020.
Given his situation, Nokmachier said, communication takes longer sometimes and occasionally needs the assistance of another person. However, technology has bridged that gap to a large extent, especially text messaging facilities of different kinds, he shared. That is how he also keeps connected with friends and classmates.
While talking to one of Nokmachier’s brothers, he said that he was worried about his younger brother when their father passed away in 2018 because losing a parent hits hard on every child differently.
He was afraid of how Nokmachier would react, because of how he used to throw tantrums earlier. But all his worries subsided when his younger brother started consoling everyone, starting from their mother.
It made him realize that his brother, who overcame his own storm, is indeed the strongest among them, shared the elder brother. He said that ‘a gifted brother is indeed the best gift he ever received’.
As for Nokmachier, he said that he wants to encourage persons with disabilities because ‘being different is a special gift and everyone is talented in their own way’.
He said that the first step towards receiving love and support from others is by loving yourself as disability is not a curse but a challenge to overcome.

Those who can hear, talk with their mouth and those who can’t, with their hands, he said. “Both are same in the sight of God,” he added.
The journey hasn’t been easy for Nokmachier but his dedication and positive outlook on life are like rays of sunshine on a gloomy day, not just for persons with disabilities but everyone still in search of their own light. He is an inspiration to all.