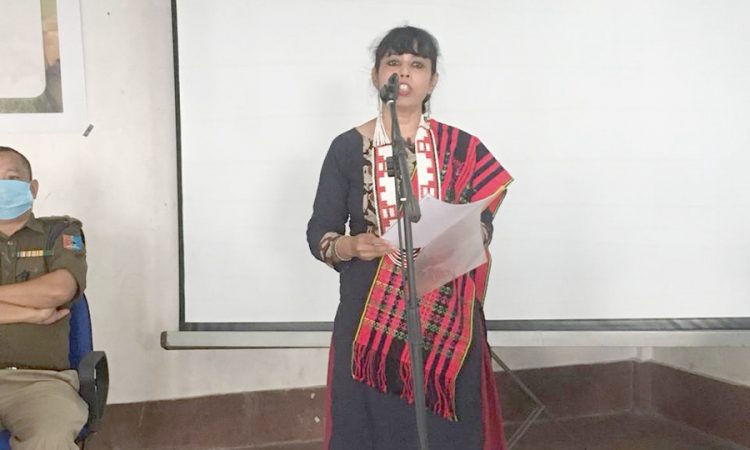 WOKHA, October 18: National coordinator, Elephant Cell, Ministry of Environment, Forest & Climate Change (MOEFCC), Dr. Pranjana P Panda, on Sunday called upon all stakeholders to join hands in mitigating human-elephant conflict in order to ensure safety of both species. She was speaking at the awareness programme on ‘human-animal conflict mitigation’ organized by Wokha Forest Division here at Old Riphyim village on Sunday.
Dr. Panda, while acknowledging the pain and suffering caused to the villagers by the wild elephants, reminded the villagers that the elephants were trapped due to increased human habitation and this leads to increase in conflict between the two species.
She stated that the severity of the conflict was also acknowledged by the ministry and to address the grievances, the number of elephant reserve in the state was increased to two from one. Dr. Panda also appreciated the indispensible role played by stake holders at every level, and encouraged them to continue their efforts in ensuring peaceful co-existance of humans and elephants.
Mhonbemo Ngullie IFS, Chief Wildlife Warden, Nagaland, in his keynote address pointed out that Riphyim village was one of the worst affected areas in the existential human-animal conflict. He said reserved forests alone couldn’t sustain the elephants and were therefore foraying into private lands for food.
DFO Wokha, Zuthunglo Patton IFS also highlighted the severity of the conflict, current measures and way through PPT.
Also speaking on the occasion, chairman of NSBB S.P Tripathi IFS (retd), also appealed to the special guest to listen and act on the grievances of the affected villagers.
Chairman of Natural Nagas, Steve Odyuo also stressed on the importance of confidence building measures as the need of the hour. He said that in view of the uniqueness of the conflict, there was a need for policy makers and stakeholders sit together and policy formation should be from bottom to top.
DC Wokha, SP Wokha, VCC Old Riphyim village and representative from Englan Range also spoke on the occasion. Earlier, the meeting was chaired by range forest officer, Lansothung Lotha. (Page News Service)

2nd round of National Deworming Day observed in Nagaland