HomeIndiaDon’t get trapped in cycle of fear that Islam is in danger in India: RSS chief
India
3 weeks agoJuly 4, 2021IndiaIslamMohan BhagwatRSS 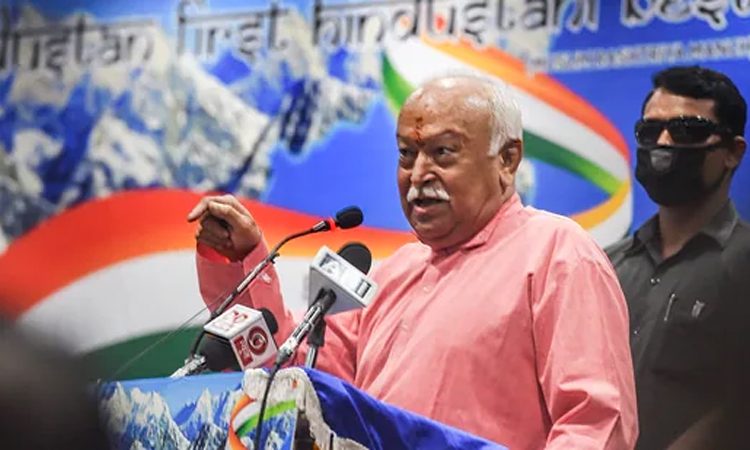 Ghaziabad, July 4: Asserting that the DNA of all Indians is the same, Rashtriya Swayamsevak Sangh (RSS) chief Mohan Bhagwat on Sunday urged muslims not to get “trapped in the cycle of fear” that Islam is in danger in India.

Addressing an event organised by the Muslim Rashtriya Manch on the theme ‘Hindustani First, Hindustan First’, he said that people can’t be differentiated on how they worship.
He also took on those indulging in lynching, saying, “They are against Hindutava”. Though at times, some false cases of lynching have been registered against people, Bhagwat said.
“Don’t get trapped in the cycle of fear that Islam is in danger in India,” he said at the event.
Underlining that development is not possible without unity in the country, the RSS chief stressed that the basis of unity should be nationalism and the glory of ancestors.
The only solution to Hindu-Muslim conflict is dialogue, not discord, he said.
“Hindu-Muslim unity is misleading as they’re not different, but one. DNA of all Indians are same, irrespective of religion,” Bhagwat said.
“We are in a democracy. There can’t be a dominance of Hindus or Muslims. There can only be the dominance of Indians.”

While beginning his speech, Bhagwat said he was attending the event neither for any image makeover nor for vote bank politics.
Bhagwat said neither the Sangh is in politics nor does it bother about maintaining an image. “It keeps on doing its work to strengthen the nation and for the welfare of all in the society,” he said.(PTI)