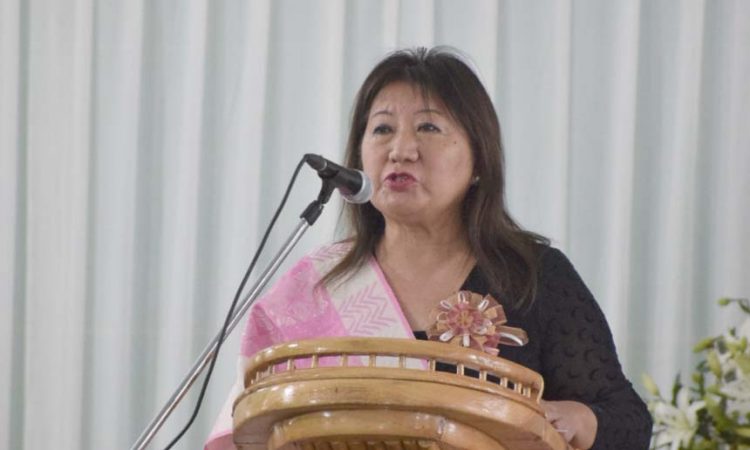 Kohima, April 10: Professor Rosemary Dzüvichü, who is also an advisor to Naga Mothers’ Association (NMA), on Saturday urged all members of Angami Catholic Youth Association (ACYA) to be messengers of peace.

Addressing the 32nd ACYA convention held at Chiephobozou, Dzüvichü reiterated the message of Pope Francis, saying that the youth have the power to change the world as they carry a strong voice for peace. She therefore reminded them “not to allow the spark of youth to be extinguished”.
Saying that the world is full of injustices, she called upon the youth to stand up for their rights. She then reminded them that despite the injustices, there is a reason for peace and that God’s plan must be recognized.
Dwelling on the theme, “Challenges ahead for the Angami Catholic Youth,” she highlighted about the growing unemployment crisis in Nagaland. In this regard, she challenged the younger generation to develop their work ethics.
Dzüvichü also raised the issue of corruption in the State saying that corruption has become a way of life in Naga society and is even evident in the churches. She urged the catholic youth to be truthful, sincere and honest in their works, and to also stand and fight against corruption.
She further urged the youth to develop a competitive spirit and educate themselves to become youth leaders.
Dzüvichü also stressed on the need to preserve and protect one’s cultural identity and tradition. She encouraged the educated youth to write and record about their history, folk songs, and so on, in order to pass on the tradition to the generations to come. She urged the youth to broaden their mindsets as Nagas and not just as members of a particular tribe or village.
Furthermore, she highlighted the issue of gender imbalance in Naga society. She said that there is now a need for women to come forward and claim for their rights. In this regard, she also urged men to think about uplifting women in the society. Citing about the lack of women in the decision-making bodies of the State, she challenged women participants to ponder upon the role of women in the society as well as the church.
Later, Sr Khrievinuo Christina Ziephrü, MSMHC, spoke on the theme “Wisdom opens the way”. This was followed by another session where Fr Keduolhou George, Principal of St Joseph College Jakhama, exhorted the gathering on the theme “Blessed is the man who trust in the Lord”.