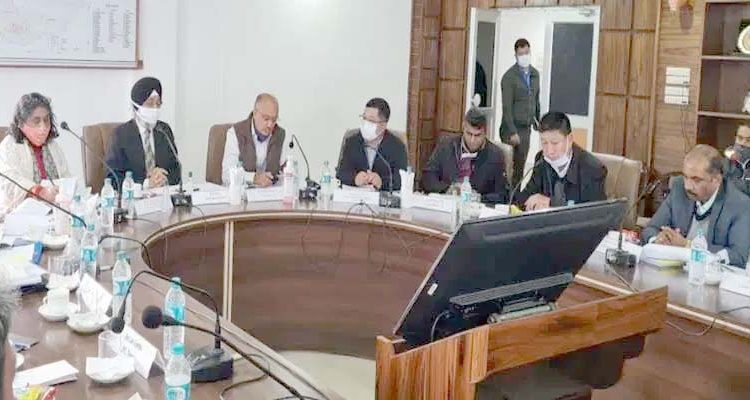 DC Tawang conveyed welcome and showed power point presentation giving detailed information on project works under progress and proposed projects for Tawang District.
Chief Secretary, Naresh Kumar highlighted about the geographical strategic importance ,its remoteness and need for improvement in air and digital connectivity of the state.He also stressed for provision of fund for quality control with projects sanctioned and online system of updating progress on schemes at Ministry level from states.
Secretary DoNER, Inderjit Singh in his address highlighted about the low fund absorbtion capacity of NE states due to which funds get lapsed,he asked that projects which are supposed to be completed within two to three years period shouldnt be kept lingering,but this shouldnt mean that quality of the work is compromised. The states needs to identify concern ministry according to their needs and projects and DoNER will play active role in getting those projects approved by the ministry, he said and stressed on need of special initiatives to expedite the completion of various projects in various districts of NE states maintaining good standard and quality.
Joint Secretary DoNER and Director DoNER also spoke on the occassion. NT Glow Secretary planning conveyed his gratitude to secretary DoNER,Chief Secretary and others for making this meeting successful.

Earlier, this morning Chief Secretary, Naresh Kumar, made physical inspection of various under going projects in Tawang like walk through market, CC Pavement in township, proposed parking in old market,Proposed beautification site of township,etc while Secretary health P.Parthiban launched Vaccination utsav at KDS District Hospital Tawang and inspected the under construction IPD ward and interacted with DMO,MS,Doctors and health workers.(Agencies)