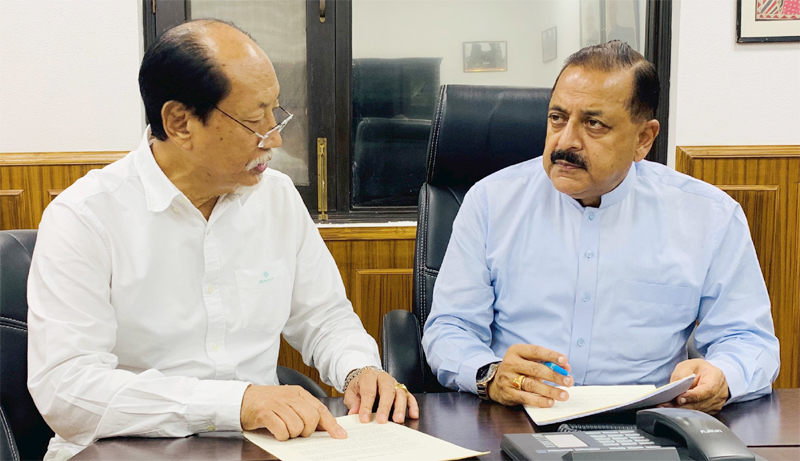 New Delhi, August 21: The DoNER Ministry has plans to partially fund a Rs 6,000-crore proposed greenfield airport in Kohima, which could be the first in the Nagaland capital.
This was conveyed by Union Minister for Development of North Eastern Region (DoNER) Jitendra Singh to Nagaland Chief Minister Neiphiu Rio, who called on him on Wednesday along with a delegation of senior officers of the state government, an official statement said.
Singh conveyed to the chief minister that the proposal to set up an airport in Kohima is being pursued seriously by the DoNER ministry and after an appropriate site was identified by the state government, a technical feasibility report was also prepared by the Airports Authority of India which was favourable for an all-weather airport.
The chief minister conveyed to the DoNER minister that the total estimated cost to set up an airport could be around Rs 6,000 crore and requested that a part of it could be funded by the DoNER ministry or the North Eastern Council (NEC).
The DoNER minister informed the chief minister that a proposal has been sent by his ministry for sanction of Rs 1,000 crore towards the project, the statement said.
According to the plans, the proposed airport will come up at Ciethu in Kohima.
Singh conveyed to Rio that Prime Minister Narendra Modi has high priorities for all eight northeastern states, particularly the far-flung ones like Nagaland.
He said under the directions of the Prime Minister, all the development projects in the Northeast are put on a fast-track and a follow-up is done on a regular basis to complete these projects within the stipulated timeline.
The DoNER minister also conveyed keen desire of the central government to ensure equitable development of Nagaland and at the same time, find a lasting end to insurgency-related incidents, the statement said. (PTI)