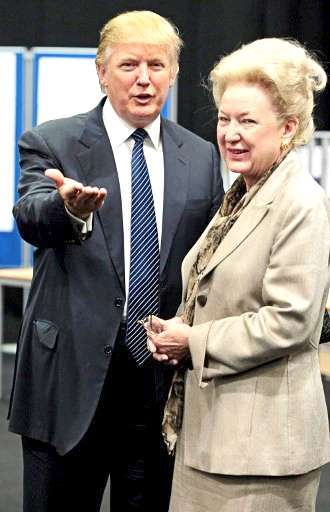 US property tycoon Donald Trump (left) is pictured with his sister Maryanne Trump Barry as they adjourn for lunch during a public inquiry over his plans to build a golf resort near Aberdeen, at the Aberdeen Exhibition & Conference centre, Scotland, on June 10, 2008. (AFP/Ed Jones)

WASHINGTON, AUGUST 24: Maryanne Trump Barry, President Trump’s older sister and a former federal Judge, described him as a liar who has “no principles” in a series of audio recordings made by her niece, Mary L. Trump, in 2018 and 2019.
The recordings were provided to The Washington Post, which published them online Saturday night. In the recording, Barry can be heard disparaging her brother’s performance as President.
“His goddamned tweet and the lying, oh, my God,” she says in one of the recordings posted by the newspaper. “I’m talking too freely, but you know. The change of stories. The lack of preparation. The lying.”
Mary is the author of the recently published book, Too Much and Never Enough: How My Family Created the World’s Most Dangerous Man. In it, she recounted how Trump’s upbringing turned him into what she called a reckless leader.
In a statement, Trump dismissed the accusations and referred to the recent death of his younger brother, Robert. “Every day it’s something else, who cares,” the President said. “I miss my brother, and I’ll continue to work hard for the American people…” (AP)