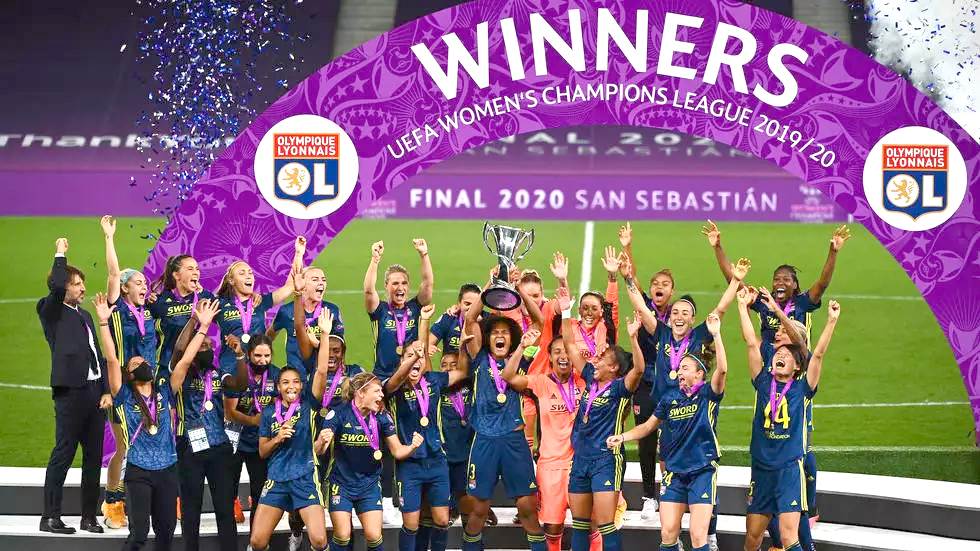 SAN SEBASTIAN (SPAIN), August 31: Lyon continued their reign as Europe’s dominant women’s team on Sunday, beating Wolfsburg 3-1 in the Champions League final to win the trophy for the fifth year running with Japan star Saki Kumagai’s goal proving crucial.
Kumagai netted after Eugenie Le Sommer had handed the French outfit the lead in San Sebastian, giving Lyon a 2-0 half-time advantage and leaving Wolfsburg with too much to do even if Alexandra Popp pulled one back in the second half.
Icelandic midfielder Sara Bjork Gunnarsdottir’s late effort made sure of the victory for Lyon, whose fifth consecutive Champions League crown is their seventh overall, comfortably a record.
Five in a row sees them equal the feat achieved by the Real Madrid men’s team between 1956 and 1960, in the early days of the European Cup. French President Emmanuel Macron even tweeted his congratulations at the end of the game.
“Now we need to win a sixth in a row to beat the record,” said captain Wendie Renard, who along with Le Sommer and goalkeeper Sarah Bouhaddi has featured in all seven final wins.
“It is hard to win this trophy but we give everything to win it every year.”
Lyon’s latest triumph confirms their status as the finest club team around even as rivals across Europe step up their investment in the women’s game.
Jean-Luc Vasseur’s team had previously edged out Bayern Munich and Paris Saint-Germain in the ‘Final Eight’ in Spain’s Basque Country, played out behind closed doors because of the coronavirus pandemic.
They also pipped PSG to claim a 14th successive French title this year and defeated the same team on penalties in the French Cup final.
This victory, against a side who won a German domestic double and were unbeaten in 40 games before the final, showcased the depth of their squad.
Lyon were missing four leading stars, with France duo Griedge Mbock and Amandine Henry injured and Norway’s 2018 Ballon d’Or winner Ada Hegerberg not fully fit. England forward Nikita Parris was suspended.
But Lyon’s long-serving president Jean-Michel Aulas continues to be rewarded for his heavy investment in a women’s team, despite the prize money for winning the Champions League being a mere 450,000 euros ($535,000), a tiny fraction of that on offer in the men’s competition.
“It is the stuff of legend because we have had to rebuild and innovate every year, but the team showed great resilience and to win a fifth Champions League in a row is absolutely incredible,” Aulas told Canal Plus.
Here, Lyon were still able to call upon a host of French internationals and foreign stars like Kumagai, Germany’s Dzsenifer Marozsan and England right-back Lucy Bronze, who is now expected to return to her home country.
They are now unbeaten in 65 matches stretching back over two years, and this is also the third time in which Lyon have beaten Wolfsburg in the final, leaving the Germans still searching for a third Champions League crown to go with their titles in 2013, when they beat OL, and 2014.
Previous finals between these sides have been close affairs, although on this occasion the holders started strongly and were rewarded with the opening goal in the 25th minute.
Delphine Cascarino cut the ball back for Le Sommer, and she pounced to convert the rebound after her first shot was blocked by goalkeeper Friederike Abt.
The second goal came in the 44th minute. Ingrid Engen stopped Amel Majri shooting but only succeeded in setting up Kumagai, who scored with a terrific left-foot strike from 23 yards.
Wolfsburg pulled one back just before the hour as Ewa Pajor set up Popp to head in from close range, but Lyon made it 3-1 in the 88th minute.
When a corner was not properly cleared, Le Sommer went for goal and her wayward shot was deflected in by Gunnarsdottir. (AFP)