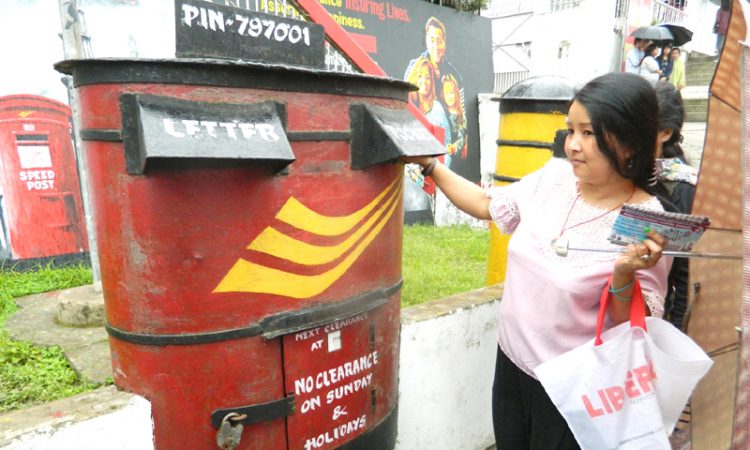 Kohima, June 14: The Domestic Workers of Nagaland Friday demanded setting up of a welfare board and also getting them registered under Labour Department.
The demand was made during the observation of International Domestic Workers Day organized by Ferrando Domestic Workers Alliance (FDWA) in collaboration with Post India, Nagaland Postal Division here on the theme “Unity is our goal, A just wage is our right: Marching on to empower domestic workers”.
As part of the observation a post card campaign with domestic workers demands was also launched. It was addressed to the President of India, Prime Minister, Union Labour Minister, Nagaland Governor and Chief Minister.
The four point demands include fixation of minimum wages under the Minimum Wages Act 1948, setting up of Welfare Board for Domestic Workers, Providing specific social security and their registration with Labour Department.
Assistant Superintendent of Head Post Office, Kohima, Eyunthung Yanthan said domestic workers are a section of the urban poor population who are neglected and least protected workforce in a state and country.
“They are often illiterate or semi-literate, mostly women and girls who are ignorant of their rights,” he said.
He, therefore, expressed hope that the weeklong campaign will present sufficient information on how the domestic workers have been going through untold struggles in their day to day life, fighting for their survival and livelihood.
This movement, he said, should empower the domestic workers and help them to stand together and fight for identity, dignity and justice.
“It is a privilege for Nagaland Postal Division to be a part of this movement and campaign to stand together with the domestic workers to fight for recognition as workers towards development and progress of our society and state,” Yanthan said.
In her introductory remark, FDWA Kohima coordinator, Rev Sister Theresa Langhu said the work of domestic workers is undervalued, underpaid and poorly regulated. Lack of decent wages and working condition and defined work time, fault accusation, abused and sexual harassment at work place are some of their major issues, she said.
Expressing concern about the situation of domestic workers, who suffer silently, she said it is our purpose to work towards achieving their dignity, justice and solidarity.
While it is difficult to identify the domestic workers with most of them not willing to come out and register themselves, she said at present in Kohima city alone a total of 680 domestic workers have been identified, out of which 350 of them have registered with FDWA.
Velelou Vadeo shared her experience as domestic worker requested the government to look into their welfare and also social security measures.
Concluding the programme, the domestic workers also mailed the post card with the four point demands. (Page News Service)