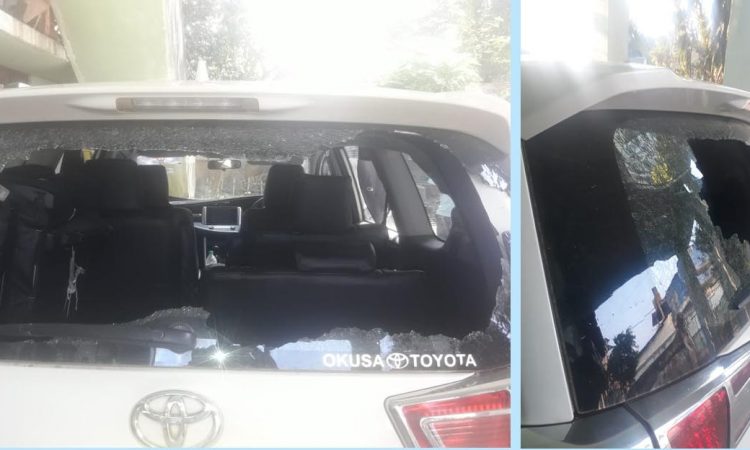 Kohima, April 4: Doctors and health workers in Dimapur have threatened to cease work in protest against assault on one of its members, last evening by police personnel who are enforcing total lockdown of Dimapur.
According to sources Dr. Sezo, a Senior Medical Officer (SMO) posted at Medziphema, was assaulted by Police personnel who were reportedly in inebriated condition. They also damaged the Doctor’s car even after disclosing his identity.
The incident took place at Purana Bazaar last evening, near his house.
Sources claimed that the commander manning the particular area was also in inebriated condition and refused to listen to Dr. Sezo’s explanation and started to assault him for reason that he was not wearing the mask inside his car.
Sources said Doctors in Dimapur wanted to cease work till the matter is settled by the authorities.
Doctors said they have been working overtime, round the clock manning all entry points and quarantine cases in all the districts, arranging logistics and attending to call of the government with the administration adding that such action by the police would demoralize the doctors and health workers. “We are thrashed by the police for doing our jobs overtime” said a senior Doctor.
Doctors and health workers who were in leaves have also been recalled for the job.
There were also reports of harassment and assault on health workers in other parts of the country.
Meanwhile situation could erupt in this extraordinary time as there are several vigilante groups emerging to control the streets, towns and villages in the State, apart from the law enforcing agencies.
The Indian Dental Association Nagaland State Branch (IDANSB) has expressed concerns over the incident where Dr Sezo was allegedly beaten up by police personnel of special task force while returning home after finishing his duty related to COVID-19 preparedness on April 3 night.
“It is extremely unfortunate to witness this kind of situation at critical times like this when the entire medical fraternity are working so hard to fight the pandemic covid-19, IDANSB president, Dr Kaketo Yepthom said adding, “This act committed by police personnel is a felony and IDANSB strongly condemns the incident in the highest manner.”
Standing with Dr. Sezo and the Association appealed to competent authorities to immediately book and punish the culprits as per the law.
It also prayed for the speedy recovery of Dr Sezo.
(Page News Service)