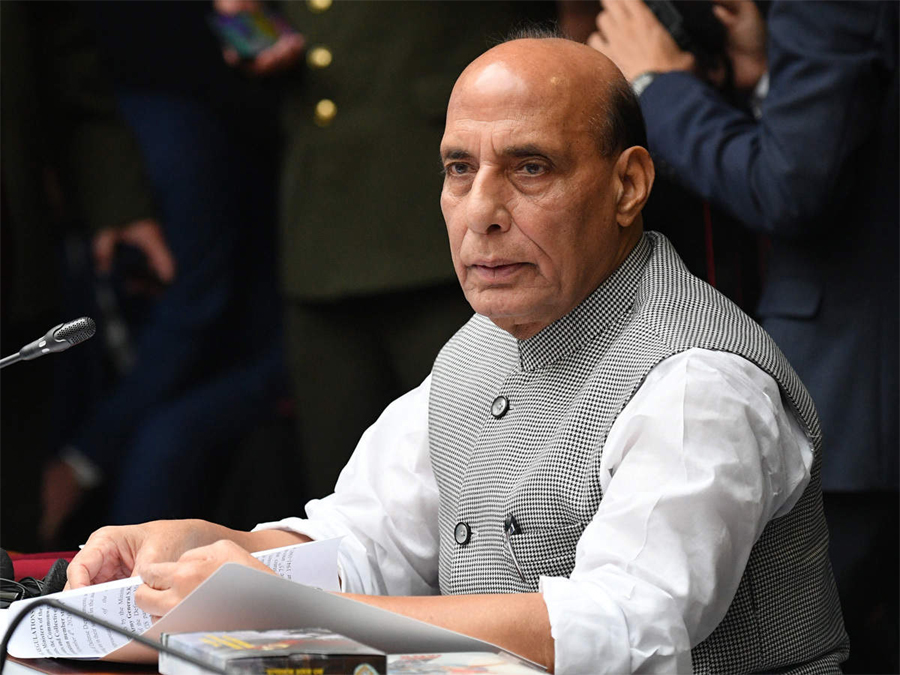 New Delhi, September 5: As the situation in eastern Ladakh remains tense, Defence Minister Rajnath Singh has conveyed to his Chinese counterpart Gen. Wei Fenghe that China must strictly respect the Line of Actual Control(LAC) and not make attempts to unilaterally change its status quo.
In the first highest level face-to-face contact between the two sides after border tension erupted in eastern Ladakh in early May, Singh told Wei during their talks in Moscow that China must work with the Indian side for complete disengagement of troops at the earliest from all friction points including Pangong Lake, according to an official statement released here on Saturday. The talks on Friday took place on the sidelines of the meeting of Defence ministers of the 8-nation Shanghai Cooperation Organisation(SCO).
Official sources said Singh told Wei firmly that India will not “cede an inch of land” and is determined to protect the integrity and sovereignty of the country at “all cost .
They said Singh answered all the points raised by the Chinese side and rebutted their “false claims”, adding the keenness for the dialogue by China was accentuated by the occupation of strategic points and heights by the Indian armed forces in Pangong area in the last week of August.
Singh also conveyed that China’s actions amassing a large number of troops, its aggressive behaviour and attempts to alter the status quo in Ladakh were in violation of bilateral pacts, the statement said.
The statement said Singh conveyed to Wei that the current situation should be handled responsibly and that neither side take any further action that could either complicate or escalate matters.
The statement said Singh advised it was important that the Chinese side strictly respect the LAC and should not make attempts to unilaterally change the status quo.
Singh also conveyed that the two sides should continue their discussions, including through diplomatic and military channels, to ensure complete disengagement and de-escalation and full restoration of peace and tranquility along the LAC at the earliest, it said.
The statement said the Chinese Defence Minister conveyed that China too desired to resolve the issues peacefully.
“The defence minister categorically conveyed India’s position on the developments along the LAC including in the Galwan Valley in the Western Sector of the India-China Border areas in the last few months,” said the statement released by both the Ministry of External Affairs and Ministry of Defence.
The two ministers had frank and in-depth discussions about the developments in the India-China border areas as well as on India-China relations, it said.
“The two sides should focus on the overall situation of India-China relations and work together to de-escalate the situation as soon as possible, and maintain peace and tranquillity in the India-China border areas. The Chinese defence minister suggested that both sides should maintain communication at all levels including between the two ministers,” the statement added.
In a reference to the outcome of the two informal summits between Prime Minister Narendra Modi and Chinese President Xi Jinping in 2018 and 2019, Singh said both sides should take guidance from the consensus by the leaders that maintenance of peace and tranquility in border areas was essential for further development of ties and the two sides should not allow differences to become disputes.
Wei said that both sides should “scrupulously implement the consensus reached between Modi and Xi and continue to solve the issues through dialogue and consultation, strictly follow the various bilateral agreements, strengthen the regulation of frontline troops and not undertake any provocative actions that might escalate the situation,” according to the statement.
In Beijing, a statement released by the Chinese Defence ministry said Wei told Singh that recently the relations between the two countries and the two militaries have been seriously affected by the border issue, and it is very important for the two defence ministers to have a face-to-face and candid exchange of views on relevant issues.
Gen. Wei also claimed that the responsibility for the border standoff lies “entirely” with the Indian side, adding not an inch of China’s territory should be lost, the statement said. The Chinese military has the resolve, capability and confidence to safeguard national sovereignty and territorial integrity, it added.
The talks in the Russian capital, lasting two hours and 20 minutes, took place days after tensions flared up again in eastern Ladakh after China unsuccessfully attempted to occupy Indian territory in the southern bank of Pangong lake when the two sides were engaged in diplomatic and military talks to resolve the four-month-old border standoff.
Following the fresh confrontation, India occupied a number of strategic heights on the southern bank of Pangong lake and strengthened its presence in Finger 2 and Finger 3 areas in the region. China has strongly objected to India’s move. However, India has maintained that the strategic heights are on its side of the LAC.
At the talks with Wei, Singh also clearly stated that while the Indian troops had always taken a very responsible approach towards border management, but at the same time there should be no doubt about “our determination to protect India’s sovereignty and territorial integrity.”
“He(Singh) emphasised that the actions of the Chinese troops, including amassing a large number of troops, their aggressive behaviour and attempts to unilaterally alter the status quo were in violation of the bilateral agreements and not in keeping with the understandings reached between the Special Representatives of the two sides,” the Indian statement said.
National Security Advisor Ajit Doval and Chinese Foreign Minister Wang Yi held over two-hour talks on July 5 following escalation in border tension triggered by fierce clashes in Galwan Valley on June 15 in which 20 Indian soldiers were killed. The Chinese side also suffered casualties but it is yet to give out the details. According to an American intelligence report, the number of casualties on the Chinese side was 35. (PTI)