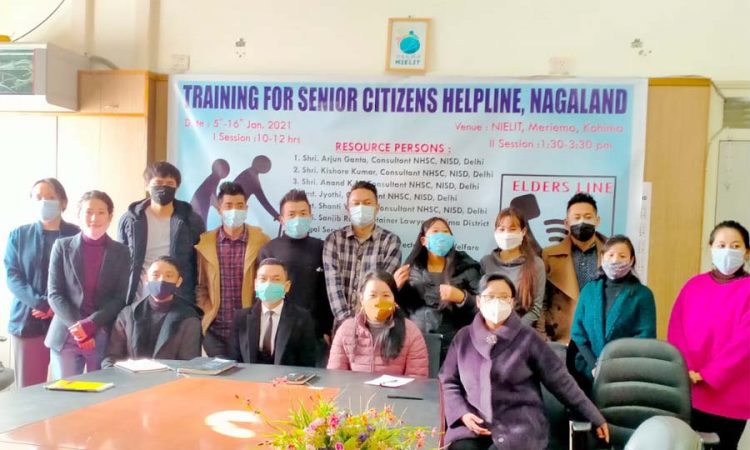 On January 15, Kohima DLSA attended the seminar of the Good Samaritan Society to give awareness on the ‘Senior Citizens Maintenance Act’ in conscience with their ongoing training of Senior Citizens Helpline, Nagaland.
Sunjib Rana, Retainer Lawyer, Kohima DLSA as resource person, spoke on the Maintenance and Welfare of Parents and Senior Citizen Act which was introduced in the year 2007. He illustrated on how one should take care of the senior citizen considering them as their own parents and added that the Act deals with the Maintenance of Parents and Senior Citizens by their children or relatives, grandchildren, who may possibly inherit the property of a Senior Citizen and that maintenance include those who are unable to maintain themselves through their own earnings or whose income is insufficient, to apply for maintenance from their children, grandchildren etc.
He stated that monthly maintenance may be awarded up to Rs. 10,000.
Vimeno Nakhro, Panel Lawyer spoke on the schemes laid down by the National Legal Services Authority (NALSA) and government. The NALSA scheme for senior citizen, introduced in the year 2016 consider persons above the age of 60 years as senior citizens. The main objective of the NALSA scheme is to create and spread awareness about the rights and entitlements of the senior citizens under various laws and Governmental Schemes laid down by our State Government and that there are about 13 schemes made for the senior citizens.
The programme was held at NIELIT,Meriema, Kohima.
Mokokchung: Mokokchung DLSA visited two police stations at Mokokchung along with women cell and discussed the rights of arrested persons and the importance of early access to justice at pre-arrest, arrest and remand and the services rendered by DLSAs with the officers-in-charge.
The Wokha DLSA sensitized children & youths On ‘Juvenile Justice Act’, Prohibition of Child Labour and other Legal Rights on January 18. Para Legal Volunteers Mhajamo Khuvung, Lichumo Kikon, Ajano Ngullie and Advocate Shanchobeni P Lotha, District Project Assistant Wokha DLSA partook in the Awareness Programme. The Wokha DLSA also jointly organized Legal awareness and awareness on Health and Various Social Welfare Schemes with Indianeers Skill Academy Wokha
at Longsa Legal Aid Clinic,Wokha. Para Legal Volunteer Ajano Ngullie spoke on various Legal Rights, health and Social Welfare Schemes, Lichumo Kikon, PLV & Trainer ISA highlighted Various skill Development Programmes. Spot registration to undergo free Skill Development training was also conducted. Eight beneficiaries got registered under PMKVY Scheme. (Page News Service)