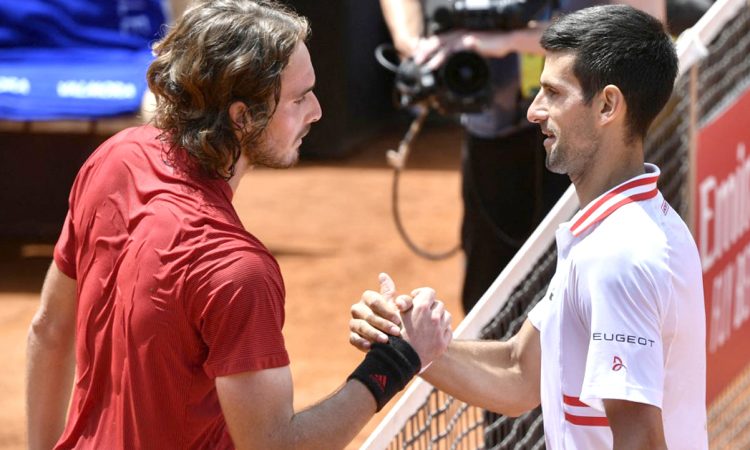 ROME, May 15: World number one Novak Djokovic survived a three-set battle with Greece’s Stefanos Tsitsipas over two days in their rain-delayed quarter-finals to advance to the Italian Open semi-finals on Saturday.
The defending champion won 4-6, 7-5, 7-5 after 3hr 16min on court in the clash which had been suspended from Friday because of rain in the Italian capital.

The Serb, a five-time Rome winner, had been trailing 6-4, 2-1 when the game was halted overnight.
Djokovic twice recovered from a break down in the final set to seal a berth in the final four for the eighth straight year on his second match point.
The 33-year-old next meets Italian Lorenzo Sonego who shocked Russian seventh seed Andrey Rublev 3-6, 6-4, 6-3 in 2hr 33min.
“It felt like we played two matches, actually we did, one yesterday where he was a better player,” said Djokovic.
“He started also better today I managed somehow to hold my nerve, breaking serve at important moments.
“Without a doubt, until the last shot I didn’t know whether I was going to win but I believed that I could.
“I am just really, really glad to overcome this challenge. It was probably the toughest match of the year for me so far.”
Monte Carlo winner Tsitsipas had moved to a 4-2 lead in the second set on their return to court Saturday, but Djokovic made a crucial break for 4-4, the Serb saving break points in the following game for 5-4 and breaking in the 12th game for 7-5 to level at one set all.
Both hit 15 winners in a balanced second set but Tsitsipas paid for four more unforced errors than his rival who used his forehand to break through with winners along the line.
Tsitsipas twice led by a break in the deciding set and served for the match at 5-4, but winner Djokovic rallied to take a 6-5 lead.
Tsitsipas served to force a final-set tie-break, but the 18-time Grand Slam winner again proved too strong for the Greek who has won none of their three meetings on clay.
Djokovic, 33, stretched his winning record over Tsitsipas, 22, to 5-2.
The Serb’s next opponent, 33rd-ranked Sonego, won their only previous meeting in the quarter-finals on hard court in Vienna last year.
Karolina Pliskova into third straight Rome final

Czech ninth seed Karolina Pliskova booked her berth in a third consecutive Italian Open final on Saturday with a three sets win over Croatia’s Petra Martic.
Former world number one Pliskova won through 6-1, 3-6, 6-2 in the semi-final as she bids to reclaim the title she won in 2019 but lost last year after retiring injured while trailing Romania’s Simona Halep in the final.
Pliskova is the only top 10 player left in the draw and will next meet either reigning French Open champion Iga Swiatek or American teenager Coco Gauff.
Earlier Poland’s Swiatek ousted fifth seed Elina Svitolina, a two-time Rome winner, 6-2, 7-5 in 1hr 36min in the match which had been pushed back from Friday because of rain in Rome.
Gauff, 17, advanced on Friday to her first clay-court semi-final after world number one Ashleigh Barty retired injured while leading their last eight clash 6-4, 2-1.
The Australian suffered from a recurring right arm issue and chose against taking any risks before the French Open, which she won in 2019, starting on May 30.
Third seed Halep withdrew with a calf injury earlier this week with second seed Naomi Osaka, four-time Rome winner Serena Williams, Sofia Kenin and Petra Kvitova, among the favourites exiting early.
Swiatek ousts Svitolina to advance to Italian Open semis

Poland’s Iga Swiatek ousted fifth seed Elina Svitolina to advance to the Italian Open semi-finals on Saturday.
The reigning French Open champion won 6-2, 7-5 in 1hr 36min against the Ukrainian in the match which had been pushed back from Friday because of rain in Rome.
Swiatek, the 15th seed, will play American teenager Coco Gauff later for a place in Sunday’s final.
Gauff, 17, advanced on Friday to her first clay-court semi-final after world number one Ashleigh Barty retired injured while leading their last eight clash 6-4, 2-1.

The Australian suffered from a recurring right arm issue and chose against taking any risks before the French Open, which she won in 2019, starting on May 30. (AFP)