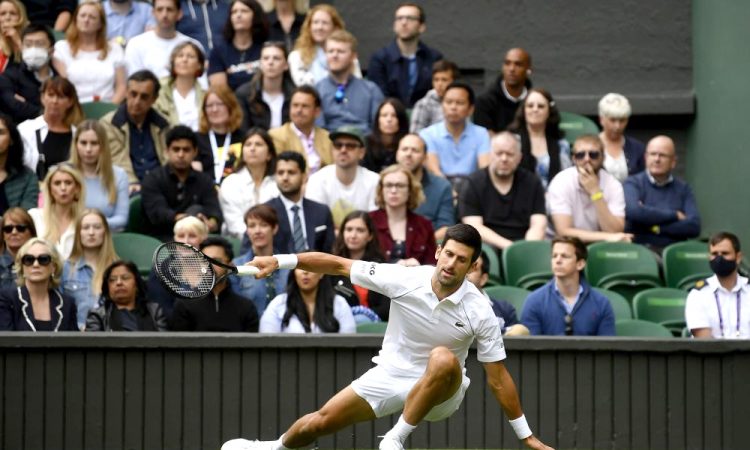 LONDON, June 30: Defending champion Novak Djokovic survived a series of falls on Centre Court to reach the Wimbledon third round on Wednesday with a straight sets win over Kevin Anderson.

World number one Djokovic, chasing a sixth Wimbledon and record-equalling 20th Grand Slam title, won 6-3, 6-3, 6-3 over the 102nd-ranked South African.
However, he slipped and fell on at least five occasions on Centre Court, the day after Serena Williams suffered a tearful, tournament-ending injury on Tuesday due to similar slips.
Each time, 34-year-old Djokovic dusted himself down to set up a clash against either Italian veteran Andreas Seppi or American qualifier Denis Kudla.
Despite the tumbles, the Serb cruised to victory over the man he defeated in the 2018 final without facing a single break point and committing just six unforced errors.
“I have a nice connection with the crowd,” said Djokovic.
“I also seem to be having a really nice connection with the grass. I don’t recall falling so much in the first two matches at Wimbledon previously.”
Svitolina battles past Van Uytvanck in Wimbledon opener
World number five Elina Svitolina was made to work hard in a tight first-round match at Wimbledon on Wednesday as the Ukrainian sealed a 6-3 2-6 6-3 victory over unseeded Belgian Alison Van Uytvanck.
The pair traded breaks at the start of their second career meeting before Svitolina gained the upper hand following a tight game to go 4-2 up and the third seed held off a late fightback to claim the first set.
The aggressive Van Uytvanck mixed up her shots, with rifled drives and delicate drops, and took every chance to approach the net to break Svitolina for a 3-1 lead in the second set before levelling the match at one set apiece.
Both players wobbled on serve before 2019 semi-finalist Svitolina rediscovered her rhythm in the decider on Court One to close out the victory with a forehand winner.
“The return was quite good for me today. I was striking the ball really good. On important moments, I was calm and my shots were quite good in the end,” Svitolina, who converted six out of 11 break point opportunities, told reporters.
There was little to separate the two with Svitolina sending down 34 winners – one more than Van Uytvanck – and both making 27 unforced errors.
“I’m just happy the way I was tracking the ball and that I could hold my nerve. This was very important for me today,” Svitolina added.

In the second round, the 26-year-old takes on Poland’s Magda Linette who beat unseeded American teenager Amanda Anisimova 2-6 6-3 6-1. (AFP/Reuters)