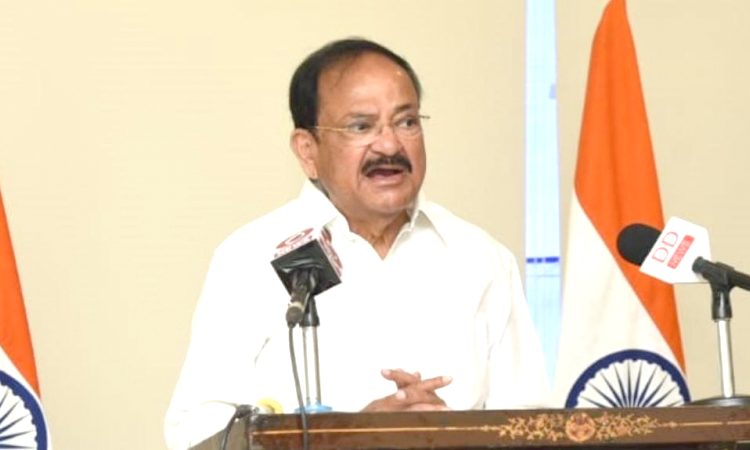 New Delhi, August 31: Vice President M Venkaiah Naidu Tuesday rued that “disruption” has emerged as the chief instrument of parliamentary conduct and functioning, noting that dysfunctional legislatures are subversion of the noble principle of constitutionalism.
He also said that dysfunctional legislatures prevent the much-desired wider stakeholder consultations before making of laws for the country and framing of policies.

“Such disruptions negate the principle of accountability of the executive to the legislatures, thereby promoting the tendency of arbitrariness, which constitutionalism seeks to checkmate,” he said.
Naidu made these remarks at the first ‘Pranab Mukherjee Memorial Lecture’ to mark the first death anniversary of the former president. The theme of the lecture was ‘Constitutionalism: The Guarantor of Democracy and Inclusive Growth’ and it was organised by Pranab Mukherjee Legacy Foundation.
Referring to Mukherjee, Naidu said, “The consensus builder that he was, I am sure that if was alive today, Pranab da would have welcomed the recent undoing of the retrospective taxation.”
A bill that aims to end all retrospective taxation imposed on indirect transfer of Indian assets was passed by Parliament in the Monsoon session.
Naidu said in the 75th year of India’s Independence, there is an imperative need to make a concrete beginning to restore the sanctity of the legislatures.
He recalled that Mukherjee was deeply pained by the rising trend of disruptions in the legislatures, including Parliament. He used to fervently stress on the need for upholding ‘decency, decorum and dignity’ in the legislatures.
“He had suggested a simple formula of ‘debate, discuss and decide’ and ‘don’t disrupt’ for law-making bodies to be effective,” he noted.

Protesting against the omissions and commissions of the governments on the floor of the legislatures is the right of the legislators. But the emotional underpinnings of such protests should not cross the limits of decency and decorum that should mark parliamentary democracy, Naidu, who is also Chairman of Rajya Sabha, felt.
The sacred mandate given by the people of the country and the trust imposed by them should not be betrayed by the elected representatives, he said.
The need of the hour is the behavioural change among the 5,000 lawmakers of the country who resort to disruptions. The mission of enhancing the dignity of the legislatures is very simple, he noted.
“It is ‘Mission 5,000’ for effective parliamentary democracy. If the elected MPs, MLAs and MLCs can mend their ways and conduct themselves appropriately inside the legislatures, our law making bodies would certainly look much different from what they are now. The people of our country are earnestly looking for such a qualitative turn around in the functioning of our law making bodies,” he said.
“While the legislatures are meant for deliberation on issues of wider public concern and making of effective laws for the benefit of the people and the nation, ‘disruption’ has emerged as the chief instrument of parliamentary conduct and functioning. Disrupted and dysfunctional legislatures are a subversion of the noble principle of Constitutionalism. They result in blatant violation of the core principles of democracy,” he said.

Naidu said people have a right to such expectation having played a key role in the consolidation of democracy. To achieve ‘Mission 5000’, there is an imperative need for a campaign by the people to influence the legislators to conduct themselves positively in the legislative chambers.
He said various elements of this campaign could be to identify the disruptors and raise the same when such lawmakers visit respective constituencies and areas and to launch ‘Mission 5000’ social media handles constituency/state-wise and post the names of disruptors with comments.
“The broad objective is to convey to the erring lawmakers the concern of the people over their conduct in the law-making bodies and the need for legislatures to be the forums for debate and discussion… Disrupted and dysfunctional legislatures can disrupt the lives of the people and the dreams of our nation,” he said.
Naidu felt one cannot object to passing of laws when “you yourself disrupt the proceedings of Parliament”.
He, however, emphasised that not many legislators indulge in disruption of House proceedings.

“In this landmark 75th year of our Independence, I appeal to all the 5,000 legislators of our country to resolve not to disrupt the proceedings of legislatures during this year. Thereafter, I can assure them that it would become a habit having sensed the fragrance of constructive conduct in the legislatures and the appreciation it would get from media and the people at large,” he said.
The Monsoon session of Parliament had witnessed repeated disruptions by opposition members in both the Houses over the Pegasus snooping row and the farmers’ issue.
Expressing deep anguish over some opposition MPs climbing on the table in the House, Naidu had told the upper house that he couldn’t sleep because of the sacrilege in the “temple of democracy”.
Referring to events which took place in the House on one of the days during the session, Naidu had said he struggled to find a provocation or reason for the low in the “august House”.
Naidu said he and Mukherjee may have been of different ideological intent and approach.
“But, for both of us, India came first. When Pranab da became the first former President of India to address a RSS training camp at Nagpur, it was a profound statement of rising above the usual divide in the larger interest,” he said.
The vice president also stressed on the need to define our mission for India @ 100.

He said there should be a wish list for the 100th year of India’s freedom.
“One such broad agenda that I propose is getting rid of the remnants of poverty and illiteracy; ensuring affordable and quality healthcare for all; ending gender discrimination; enhanced and equal participation of women in workforce… ensuring farming as a remunerative enterprise…
“India taking its due place in the United Nations Security Council; having got the first Prime Minister from the backward communities, to have the first PM from weaker sections and at least half a dozen women chief ministers as a vindication of inclusive polity… We have no option but to succeed in this mission,” he said. (PTI)