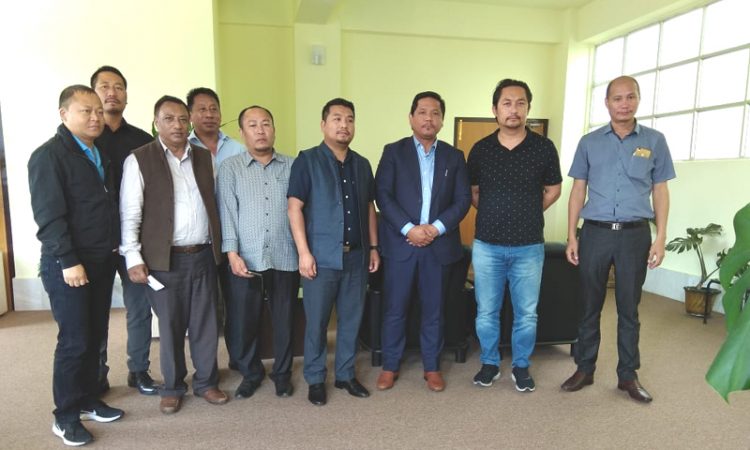 Kohima, September 14: A delegation of Naga Students’ Federation (NSF) was in Shillong on Thursday on a feel good mission against the backdrop of Khasi students opposing construction of a patient guest house at Northeast Indira Gandhi Regional Institute of Health and Medical Sciences (NEIGRIHMS).
The team was led by former NSF president and now PWD Minister, Tongpang Ozukum and other senior former NSF members. The Minister also hosted a dinner for the Khasi student leaders at Nagaland House. The dinner diplomacy is expected to favour Nagaland which would benefit Naga patients.
Leaders from the two student organisations discussed about the proposed guest house outside the NEIGRIHMS. Sources said there was a breakthrough and that assurance was given to the visiting team to sort out the matter at the earliest.
Sources said NSF team expressed gratitude to the Khasi student leaders and assured to work together for upliftment of students of the two communities.
The Nagaland Minister also met Meghalaya Health Minister and Urban Minister and sought their support to break the impasse so that Nagaland Government could start the construction work.
In July Nagaland Government proposed laying of stone at the site was stopped by agitating Khasi students.
Meghayala Government has allotted 2.27 acres of land at New Shillong a few years back. But the prime site has become a sore eye for the Khasi students and has been demanding the Meghayala Government to take back the land.
Other Northeastern States have also acquired land for guest house but there has been no opposition from the Khasi Students’ Union.
Every year hundreds of Naga patients go to NEIGRIHMS for treatment.
The premier health institute has become a health destination for neighbouring countries like Bhutan, Nepal and Bangladesh too and the Meghalaya Government is trying to promote medical tourism through this institute. (Page News Service)